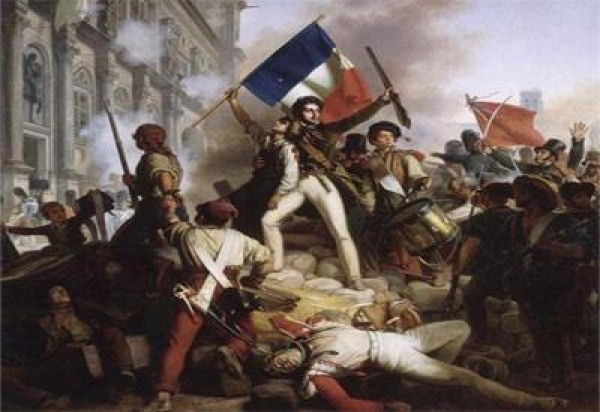 Throughout the 19th century, the French Revolution was for the majority of philosophers and politicians, the epitome of the release of any and all yoke symbols of alienation and slavery around the world, particularly in Europe and also in the Arab countries under the Ottoman Empire. This pioneering movement originally wanted to promote a change in political institutions and thereby the whole society. It turned quickly against all forms of the autocratic monarchy reigning in the name of the divine law. It rose against despotism, religious obscurantism and injustice. Who would have thought at that time, in the 18th century, that one day things would change forever? Who would have imagined that the will of the poor peasants, « the mob « the « sans-culottes « would draw the new face of France for centuries to come?

Ask the question differently: Who would have thought that until now, in the early 21st century, the Place de la Concorde and Place de la Bastille remain Meccas of the respective right and left ? Two symbolic places of change, but also two key landmarks in the history of the French Revolution. The former, where King Louis XVI was beheaded, remains nostalgic for some people while the latter is still resounding with victory songs of the people of Paris united against the fortress - prison of the Bastille , the feared and hated symbol of royal power. But how could this be possible ?

A lot of blood was shed and the destruction and devastation remained visible as engraved in stone as in the consciousness of men. This period of turmoil, was a source of sadness for some and a risk to the recovery for others. The French Revolution, as with any other revolution, was soon followed by a counter -revolution. After the Terror came Napoleon. Decades would be required to build again a republican pact.

But this revolution has been changing the face of France and Europe with it. Is it right to think, however, that we can achieve regime change without wars or conflicts, or is it only at this price that we are able to achieve a reliable and sustainable governance ?

Should we not learn from this flagship revolution in the history of mankind, that to achieve social peace, years, or rather decades were required to arrive at a simple, yet logical statement which is often ignored or left to oblivion ? A finding that is a consistent expectation of the people, which is the desire to live together in peace by betting on peace alone to guarantee citizens their rights and freedoms. In other words, the primacy or primary objective of the peace is not an option but an essential choice, a fundamental one.

This statement, simple as it may seem, is actually much more difficult to apply to daily life in the Arab countries. In short, the idea of eliminating the other suggests that the other is being viewed as the enemy. And the idea of the annihilation of the difference is an integral part of every revolution and every movement involving structural change in society. But it should be a step, not an aim, otherwise no peace is possible.

The example of the French Revolution has not only been tried and tested but has also become the workhorse of many Arab intellectuals and thinkers in the 19th century to introduce into the Arab lands of the Ottoman Empire, values of Liberty, Equality and Fraternity. Values that appear to the present day as mountains that need and remain to be conquered. Values that seem to be unknown, or at least ignored in the political terminology used in the Arab countries raging with social unrest and revolts. What we hear today are words without specific content or verification. Empty words, when today’s men and women need full words in order to experience a reality to which they aspire.