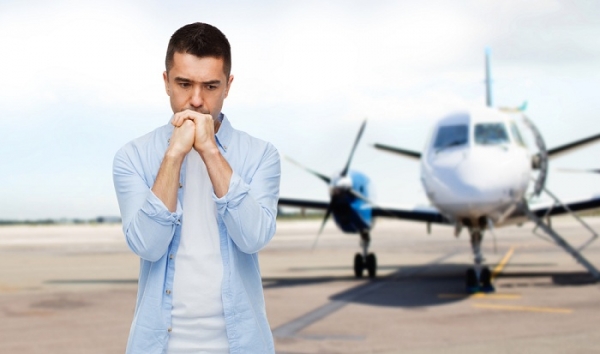 Things that are ignored and overlooked cause much less anxiety even if they are in fact dangerous.

The fear of flying receives more attention than other phobias because air travel is often difficult to avoid. A fear of flying may prevent a person from going on vacation, visiting family and friends who live abroad, and it can cripple the career of a businessperson by preventing them from traveling on work-related business trips.

The fear of flying is learned ! Most kids enjoy flying, love to travel and play with airplanes. Most people develop fear of flying later in life, when they start to realize the possible risks that could arise. Ignorance is bliss ! The less one knows the less he or she gets scared. Statistics show that airplanes are way safer than other common forms of transportation. Only the crashes are reported by the media hence the overall impression created may be that air travel is dangerous, which is untrue. Successful landings are not displayed in the media !

Fear of flying is often worsened by how much we do not know about airplanes. It is magnified by our ignorance of how planes operate. Misunderstandings of the principles of aviation can cause an unjustified fear of flying. For example, many people incorrectly believe that the engines of a jet airliner support it in the air. This is a false premise. In reality, all fixed-wing aircraft glide naturally, and the engines serve only to maintain altitude during the flight. A big cause of fear of flying is that it is difficult to imagine how planes stay in the air, thus a person’s understanding of the physics behind flying can reduce the person’s fear about flying.

Here are a few tips for you to overcome your fear of flying:

Psychotherapy helps a lot ! The person who is anxious equates “arousal” with “fear”, and believes that if he or she feels scared, then there has to be danger. If a phobic flier were able to fly in the cockpit, the pilot’s comfortable facial response to an unexpected noise or motion would adequately prove the absence of danger. But when information in the cabin is unknown, it is impossible to know for sure whether there is danger or not. Stress hormones continue to be released. As levels rise, anxiety increases and the urge to escape becomes paramount. Since physical escape is impossible, panic may result unless the person can escape psychologically through denial, dissociation, or distraction.

In the cognitive approach, the passenger learns to separate arousal from fear, and fear from danger. Cognitive therapy is most useful when there is no history of panic. But since in-flight panic develops rapidly, often through processes which the person has no awareness of, conscious measures may neither connect with - nor match the speed of - the unconscious processes that cause panic.

Sometimes medications can reduce the bodily reaction to fear. Medication decreases the person’s reflexes. Aerophobia (or fear from flying) is treatable!