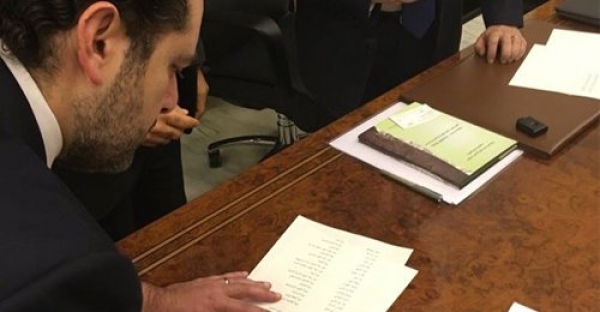 While the Constitution has no explicit articles that bind the prime minister designate to declare the formation of the Cabinet within a specific period of time, Article 64 stipulates in its second paragraph that “the Prime Minister shall conduct the Parliamentary consultations involved in forming a Cabinet. He shall sign, with the President, the Decree forming the Cabinet. The Cabinet must present its general statement of policy to Parliament and gain its confidence within thirty days of the day of issuance of the Decree. The Cabinet shall not exercise its powers before it gains Parliament’s confidence nor after it has resigned or is considered as having resigned, except in the narrow sense of managing affairs.”

This binding period was introduced into the Constitution following the 1990 Taif Accord. Subsequently, the current Cabinet whose Decree of formation was issued on February 15 should complete its statement of policy and submit it to Parliament prior to March 16, 2014. What awaits the government should this period be violated?

The Constitution does not provide express answers to this question and jurists hold two dissenting opinions about it: one camp believes that the government would be considered as having resigned and that the President of the Republic should initiate new parliamentary consultations to decide on a new- or the same- designate to form a Cabinet; the other opines that, in case of agreement, this period may be overstepped and ministerial statement discussions may continue, but the Cabinet, which remains in power, may not convene.

Since 1960, 42 governments have succeeded to power in Lebanon. For various reasons and considerations, some of these governments (3 governments in addition to the Aoun government formed by the end of Amine Gemayel’s presidential term) failed to present a statement of policy while others completed theirs at record speed within 1 to 5 days. Yet, several governments, especially those that came to power in times of crises, took up the entire period to which the law entitles them (1 month) to finish their statement as illustrated in the following Table 1.

At face value, the ministerial statement is the mainstay of the government work as it outlines its policy in diverse fields- development, political, economic and administrative- and calls it to account accordingly. However, in Lebanon, governments are rarely held responsible for the extent of the commitment they exhibit toward their ministerial statements and these statements remain ink on paper, even as far as major and critical subjects are concerned.