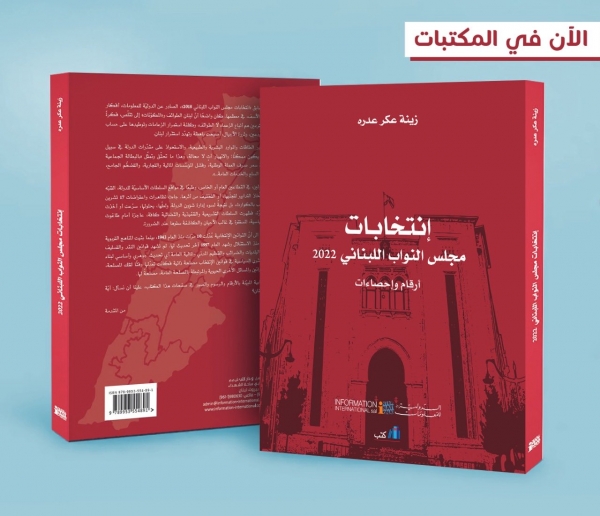 in a Documentary Book

A detailed book about the 2022 Lebanese Parliamentary elections has been published by “Information International” and “Kutub Publishing”.

The book, “Lebanese Parliamentary Elections 2022”, prepared by Zeina Akar Adra with an introduction by Jawad Adra, is among a series of publications that “Information International” publishes routinely.

The second chapter tackles the results of the electoral districts according to the lists, candidates and votes in the fifteen districts throughout the Lebanese territory. At the end of this chapter is a list of the winners and the number of seats won by each list, in addition to the votes of the lists with their different political orientations.

The third chapter is a presentation of the results obtained by the winning candidates according to the electoral districts and political forces. It includes a table with the names of the deputies in 2022, of which another table is derived where the names of the deputies who won the elections more than one time are published, in addition to another table that mentions the names of the first-time winning deputies. This is followed by a presentation of the percentage of preferential votes in the small district, indicating who got the highest percentage of preferential votes.

The fifth chapter is a presentation of the names of the winners and the most prominent losers according to the political forces and different religious sects.

The sixth chapter is a table presenting the ages of the deputies, in addition to the ages of winners and losers according to sect and age group.

The seventh chapter is devoted to women candidates.

Chapter eight presents the electoral process in the countries of expatriation according to the electoral districts and countries, including the numbers of non-resident registrants by sect and continent, in addition to the numbers of registered non-resident voters by major electoral district, sect and gender. As it is common in most of the electoral cycles that took place in Lebanon, there are mutual accusations between the competing groups about electoral spending - especially the external one - and this is what is addressed in the ninth chapter of the book.

As for the tenth chapter, it is an explanation of Lebanon's sects, demography, numbers and ages of Lebanese in 2022, according to age groups, sects, and electoral districts. The penultimate chapter presents the parliamentary appeals.

At the end of the book, five appendices are listed as follows:

Appendix No.1: Parliamentary Elections Law and amendments of the law.

Appendix No.2: Voters according to the Registration committees’ records.

Appendix No.3: The lists and the related number of candidates according to the fifteen electoral districts.

This book, which will be published in English and Arabic, is a very important reference book for specialized researchers as well as for those wishing to learn about the elections processes and their results. Perhaps it is unique in the Arab world.

The book is an indispensable source for studying the Lebanese electoral experience with all its negative and positive aspects.