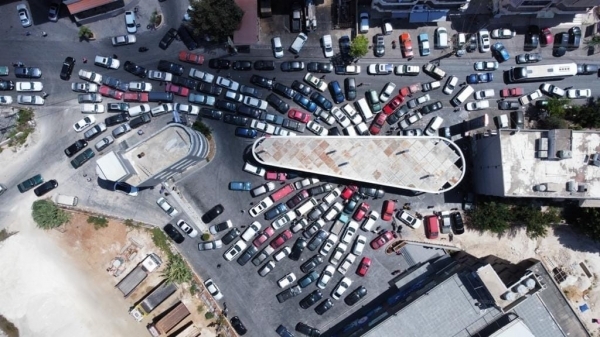 The fuel shortage crisis has caused great losses in various productive and economic sectors. In the absence of fuel, the hours of electricity supply have decreased, causing the institutions with no generators to suspend their work and those with generators to operate them on diesel fuel (at the official price of LBP 57,000 or at the black market price of LBP 250,000- 350,000 per 20 liters), which led to an increase in the production cost.

The shortage of gasoline has also triggered losses due to the long vehicle queues formed at the petrol stations and the long hours of waiting under the scorching sun that frays the nerves.

It is difficult to calculate the cost of diseases and health crises resulting from the long wait and nervousness, as well as the cost of pollution and hours-long queues, the cost of those killed and injured during the clashes at petrol stations and of those who turned to the black market to purchase gasoline at prices ranging between LBP 200,000-500,000 per 20 liters. There is also the cost of losing production and delaying employees from getting to work.

It is possible however to estimate the direct loss caused by the long wait by adopting the following mechanism:

If we consider that, during the four-month crisis, every car or vehicle owner had to wait about 23 times, then he would lose between LBP 690,000 and LBP 1.2 million. Therefore, the total loss of productivity borne by car and vehicle owners (1.2 million) and caused by the petrol crisis and the long queues at filling stations would be between LBP 830 billion and LBP 1,440 billion, i.e.an average of about LBP 1,100 billion. This figure may seem small if calculated in USD (around USD 58 million), but in fact it represents 8% of the 2021 state revenues (amounting to LBP 13,500 billion). The cost is expected to rise with the increasing number of cars waiting if the crisis remains unresolved.