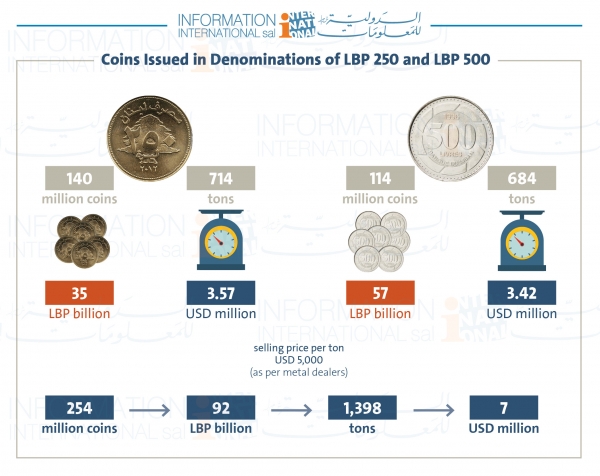 Coins are worth a fortune

“Yet not too soon”

Lebanese people are desperately seeking a source of income as the country is mired in an unprecedented economic and living crisis marked by a high cost of living, a declining purchasing power, a high rate of unemployment and a loss or decline of income. In this regard, and in order to secure a little income, many Lebanese have started collecting the circulating LBP 250 and LBP 500 coins to be sold for smelting, considering that their bullion value exceeds the official value. But this is just an illusion as facts and figures prove otherwise.

Figures indicate that the coins issued in these two denominations are as follows:

Thus, the total is 254 million coins valued at LBP 92 billion and weighing 1,398 tons, with each ton sold at USD 5,000 (according to those who deal with this kind of metal). This means that their value as metals amounts to USD 7 million or LBP 77 billion (the dollar rate at LBP 11,000), i.e. lower than their current value.

Some Lebanese may be betting on a further collapse in the Lebanese pound’s exchange rate, reaching perhaps LBP 15,000 or more to USD 1. At this point, the bullion value will exceed the monetary value, reaching more than LBP 105 billion.

Coin collecting will actually lead to a shortage in the market and saddle the state with huge bills as the minting cost of coins exceeds their market value.