Following the great collapse of Lebanese pound against US dollar and other foreign currencies, the salaries and wages earned by the majority of employees in Lebanon have declined considerably to be among the lowest in the world, equal or even less than the poorest countries. This decrease will affect the majority of Lebanese as Lebanon heavily depends on imported goods and materials, or local goods that need imported raw materials (90% of its consumption). This article lists the salaries and wages as defined by Law No. 46/2017 at the exchange rate of LBP 1,500 and LBP 9,400 per USD.

This is not a call to increase salaries and wages but rather a warning of the country’s situation after decades of non-productivity, extravagance and debt, causing the Lebanese people to have a consumerist lifestyle that exceeds their financial capacity.

Minimum wage: a decline of 84%

As shown in Table No. 1 below, the salaries of 4th and 5th Category employees have decreased. The lowest salary was USD 633 before dropping to only USD 101.

Table No. 1: Salary decline of 4th and 5th Category employees.

The highest salaries have also declined. As shown in Table No. 2 below, the salary of Grade 1 Director-General has fallen from USD 3,000 to USD 478.

The decline has also affected the military personnel’s salaries and indemnities. After totaling about USD 5,637, the salary and indemnities of Major General, the highest after the General, became USD 900. As shown in Table No. 3 below, the salary of Grade 1 soldier, which is the lowest, has decreased from USD 864 to USD 138.

Table No. 3: Decline of military salaries and indemnities. 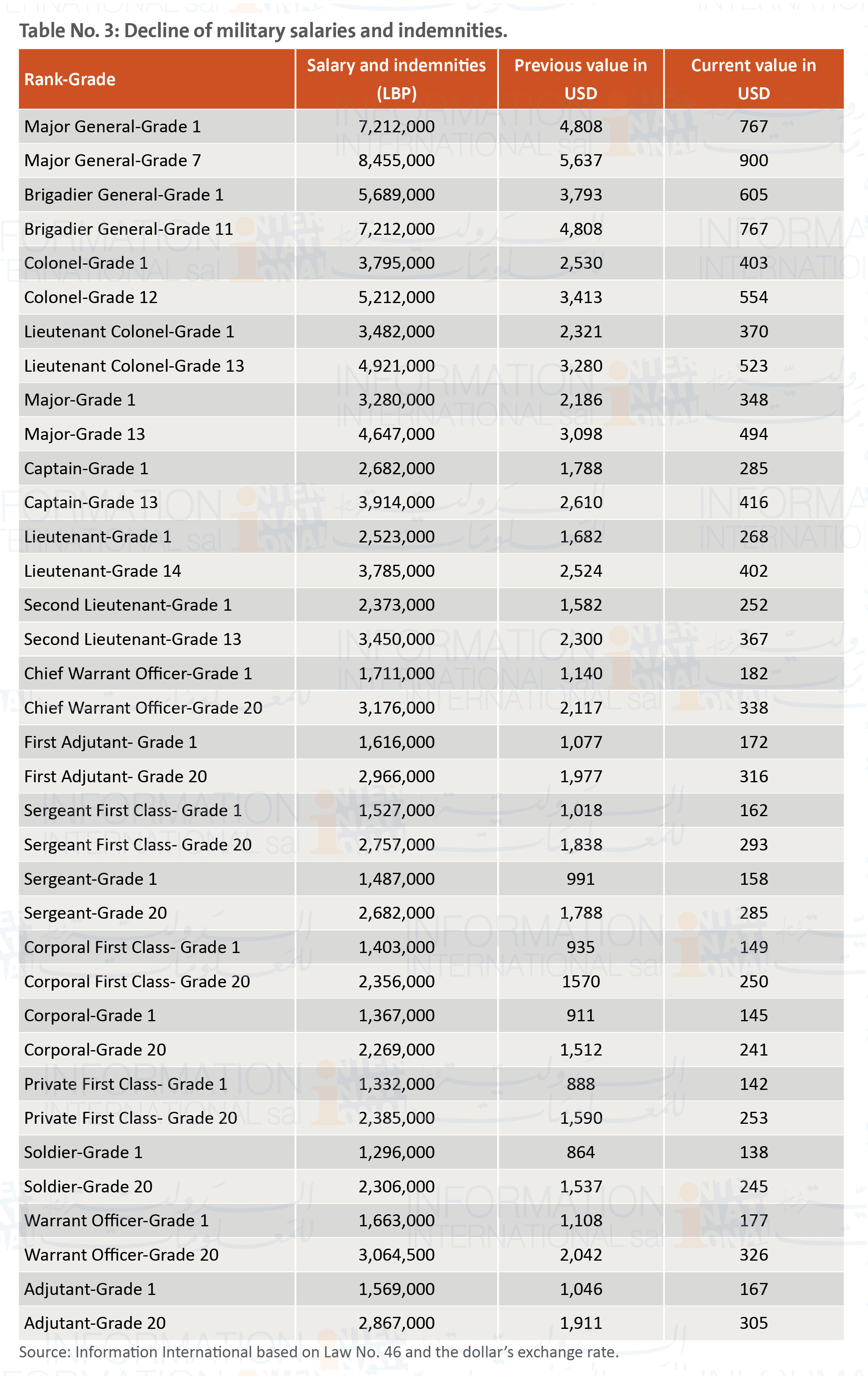 Note: For each military rank, we listed the lowest and highest grade.

Table No. 4 below shows that the highest salary earned by judges has decreased from USD 6,233 to USD 995.

Table No. 4: Decline of judicial salaries.

As shown in Table No. 5 below, the highest salary of Lebanese University professors has decreased from USD 5,617 to USD 896.

Source: Law No. 206/2012 on raising LU professors’ salaries and the dollar’s exchange rate.

As shown in Table No. 6 below, the highest salary of teaching personnel has declined from USD 3,497 to USD 558.

Most of commercial and industrial employees have salaries ranging from LBP 1 million to LBP 2.5 million. These salaries that varied between USD 666 and 1,666 have decreased today to between USD 106 and 266. The banking sector employees are among the best in terms of salaries as they receive 16 salaries per year, totaling between LBP 630,000 and LBP 14 million with an average of LBP 3.4 million. This means that what was worth USD 2,266 in the past is worth USD 361 today.