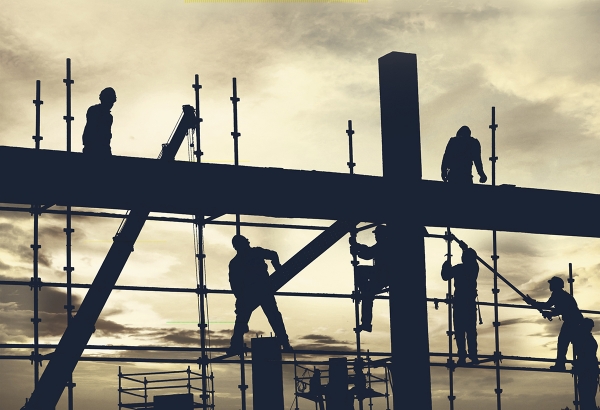 In 1977, after the election of Elias Sarkis as president and the formation of a new government under the leadership of Dr. Salim Hoss, officials wrongly believed that the Lebanese war was over. They decided to establish the Council for Development and Reconstruction (CDR) to rebuild what had been destroyed and to economically and socially jump-start Lebanon.

What is the CDR? What are its role and tasks? What achievements and projects did it make? How much money did it spend? Did it fulfill its goal?
Creation of CDR
The CDR was created by virtue of legislative decree No.5, dated Jan. 31, 1977, which describes it as “a public institution with financial and administrative autonomy and which is directly accountable to the Council of Ministers.” The decree also stipulates the abolishment of the Ministry of Public Planning.
Tasks
•According to the decree, the council has many important and diverse tasks, including the following:
•Draft a general plan, subsequent plans and reconstruction and development programs, and propose economic, financial and social policies in tune with the general plan in the framework of specific development •goals that must be approved by the Council of Ministers.
•Outline a draft budget to implement the general plan.
•Propose reconstruction and development bills.
•Outline a general guidance framework for civil regulation and get the approval of the Council of Ministers.
•Advise the Council of Ministers on economic and financial relations with states and bodies.
•Prepare and promulgate statistics related to all aspects of economic and social activity.
•Request that all ministries, public institutions and municipalities prepare projects that conform to the general goals of reconstruction and development.
•Provide suggestions for the formation, development and guidance of financial institutions and private/public companies involved with development.
•CDR has the right to sign deals for domestic and external loans, which can also be in the form of bonds.
•The government can sponsor CDR’s loans.
•CDR has the right to lend money to public institutions and municipalities. In 1983, the CDR was given the right to construct in every area affected by hostilities or natural disasters.
Amendments
The CDR’s founding law underwent many amendments, of which two are essential:
Amendment by virtue of Law No. 117 dated Dec. 7, 1991, which authorized the establishment of real estate companies (with the intention of establishing Solidere Company).
Amendment by virtue of Law No. 247 dated Aug. 7, 2000 and amended by Law No. 295 dated April 3, 2001. The latter law stipulates expanding CDR’s role and merging it with Council for Development Projects and the Council of Greater Beirut Projects. However, this integration was only partially implemented as the CDR’s board of directors refused to incorporate the employees of both councils into the CDR.
Supervision over the CDR
Article 12 stipulates that the CDR is subject to the Audit Bureau’s supervision.
Resources
CDR resources consist of:
• Funds allocated from the public budget
• Loan contracts
• Financial transfers, taxes and fees
• Treasury loans

CDR’s Management
A board of directors consisting of 12 members maximum manages the council. The members are appointed by a decree issued by the Council of Ministers. They include a president, two vice presidents and a secretary-general, who together manage the CDR’s office. These members are full-time employees appointed for a five-year term. As for the part-time members, they are appointed for a three-year term. The council also has a government commission that follows up on its work.

As customary, the president of CDR is a Sunni Muslim and its members are distributed among the other sects. Table No.1  below shows that the CDR has had eight boards of directors since its establishment.

Source: Decrees on appointment of members of the board of directors-the Official Gazette. 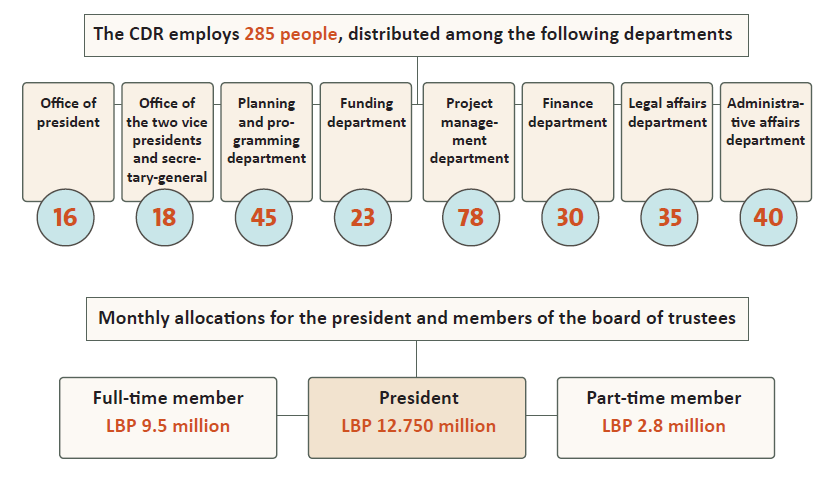 Administrative Budget
A special budget is annually allocated for the CDR from the Council of Ministers’ budget, in order to pay salaries, wages, compensations and other related allowances, as well as to provide office supplies and pay telecommunications, electricity and water charges. This budget soared from LBP 6 billion in 2000 to LBP 38 billion in 2017. Table No.2 below shows the evolution of CDR’s administrative budget (2000-2017). 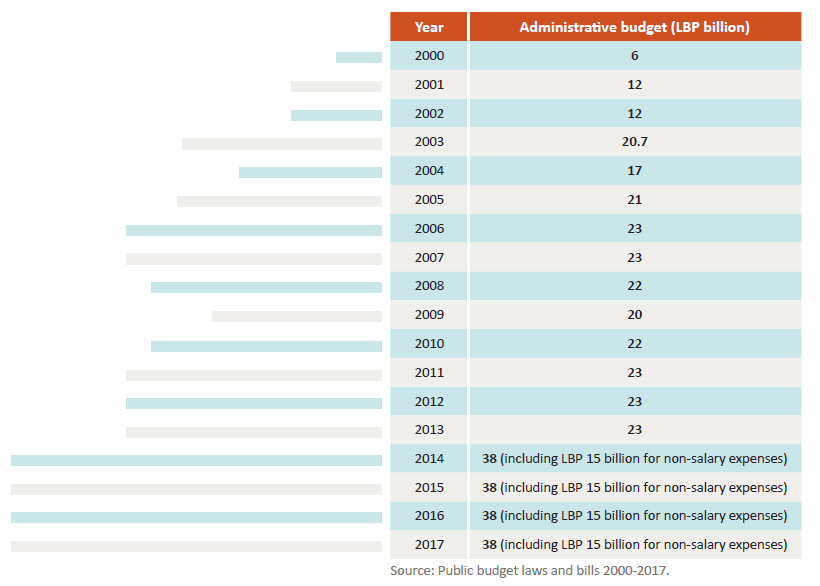 Projects Implemented or under Implementation
The CDR is currently implementing dozens of projects throughout Lebanon. Table No. 3 below shows a sample of USD 710 billion’s worth of projects.

Table No. 3: Some of the CDR’s Projects. 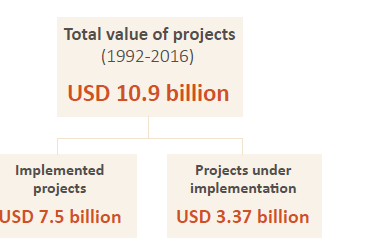 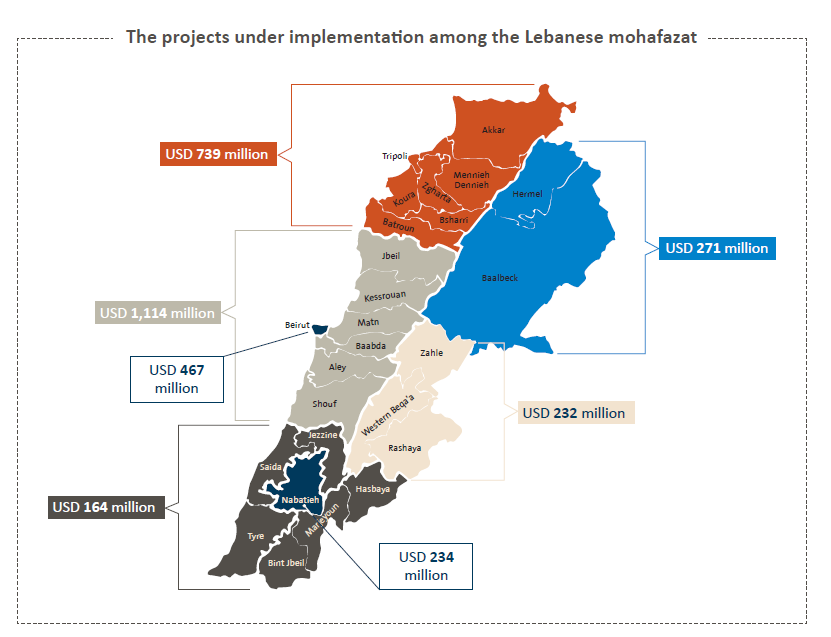 As for the implemented projects, they are distributed according to the aqdiyah as shown in Table No. 4 below.

Table No. 4: Distribution of projects implemented by CDR. 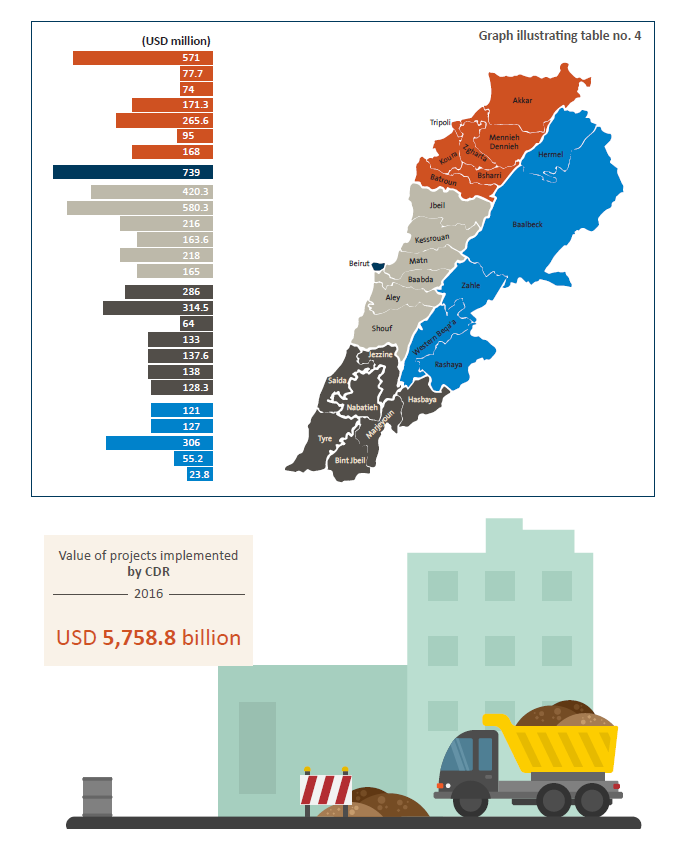 Projects Distribution by Sectors
The projects implemented between 1992 and 2016 amounted to USD 10.880 million. They were distributed among 13 service sectors and the largest share was for the transport sector (road construction, highway construction, etc), representing about 30% of the total value of projects. Table No.5 below shows how the projects were distributed by sectors.

Table No. 5: Projects by sectors.

Source: CDR’s report 2016.
A Sample of CDR’s Projects
In order to implement its high-cost projects that should be of high quality as they are well studied and controlled, the CDR adopts a multi-stage mechanism. However, the opposite is sometimes the case. The only difference between these projects and those implemented by the ministries is their high cost.
The following is a sample of some CDR’s projects:
Construction of a parking lot in Tripoli:
This project was cancelled before implementation. Its total cost is USD 19 million.
• Preparation of the study: USD 478,500. The cost of technical supervision of the study audit is USD 30,000.
• Project works: USD 17,431,609
• Project supervision: USD 610,106
• Technical supervision: USD 52,294

The CDR has replaced many ministries and been granted great powers. Yet, its achievements and aspirations have been disappointing and made most of the Lebanese pay tribute to the work of ministries. 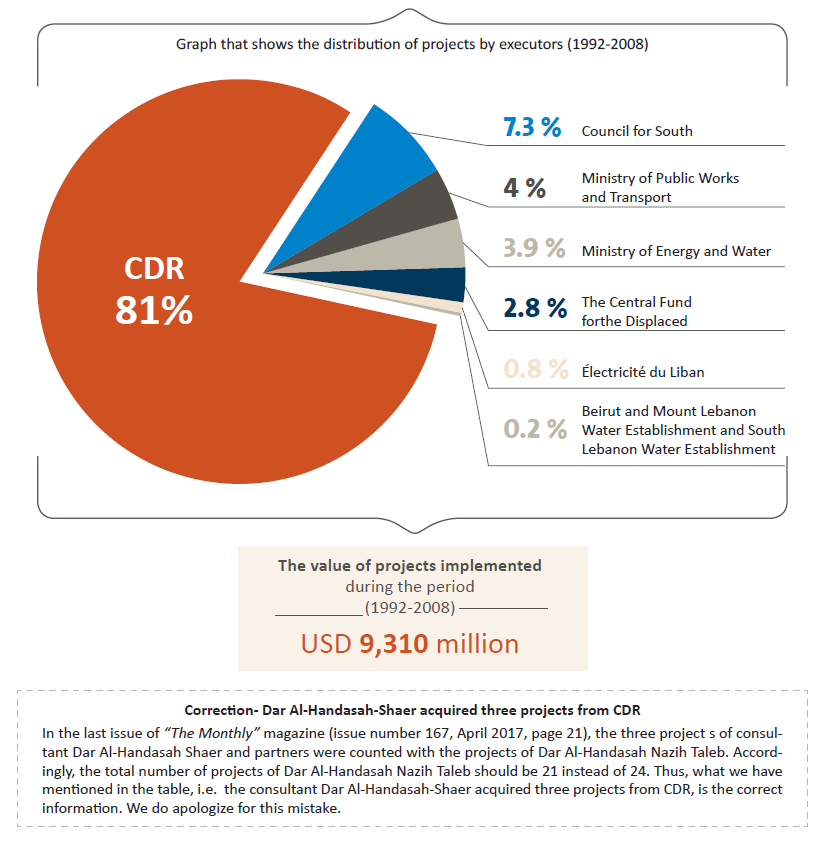