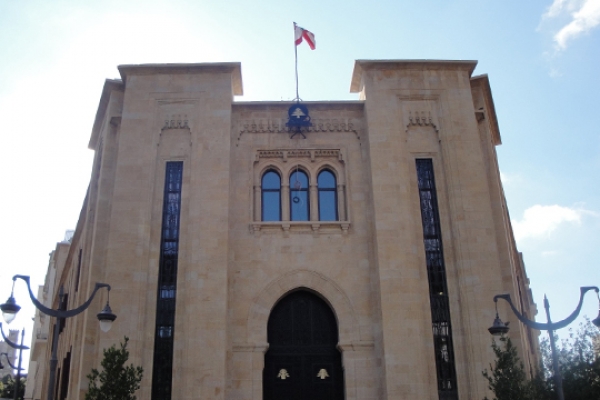 More than 24 bills and proposals of parliamentary electoral laws are being discussed today. This number may increase every day and every week, from now on until the adoption of the law that is supposed to take place before expiration of Parliament’s mandate on June 20, 2017.

Bill of Najib Mikati’s Government
This bill was adopted at the government session on August, 7, 2012. Its key articles are the following:
• To adopt a proportional voting system that gives each electoral list a number of seats and the number of votes it receives.
• To vote by means of prepared papers.
• To adopt two preferential votes. This can detect the most popular MPs.
• To adopt a gender quota so that each list includes at least one candidate of the opposite gender without any guarantee to win. This quota is for candidates and not for winning the elections.
• To divide Lebanon into 13 electoral districts.

The Orthodox Proposal
Hereunder the text of the proposal submitted by Change and Reform bloc MPs Alain Aoun and Neemtallah Abi Nasr on September 10, 2012:
• The proportional representation is adopted in the parliamentary elections.
• Lebanon is one single district.
• The MPs allotted to each sect are elected by the voters of the same sect. For example, there are 34 Maronite MPs in Lebanon. All Lebanese Maronite voters cast for the list of 34 Maronite candidates distributed according to the Aqdiyah, e.g. 2 from Batroun and 5 from Kessrouan, as they cannot be from the same region.
• The electoral lists are registered at the Ministry of Interior and Municipalities within 40 days prior to the date set for elections.
• The voters cast their ballots using the official ballot papers prepared beforehand by the Ministry of Interior and Municipalities.
• Jewish voters (with no MP) are entitled to vote for Muslim and Christian candidates.
• Every voter shall cast one preferential vote for a candidate on the list for which he/she voted.

One Vote
Kataeb party Chief MP Sami Gemayel suggested the adoption of an electoral law based on “the one-man-one-vote system”. Apart from the number of MPs in the electoral districts, the voters are equal. They shall only vote for one MP.

• 64 MPs are elected according to the plurality voting system in the currently adopted 26 districts. 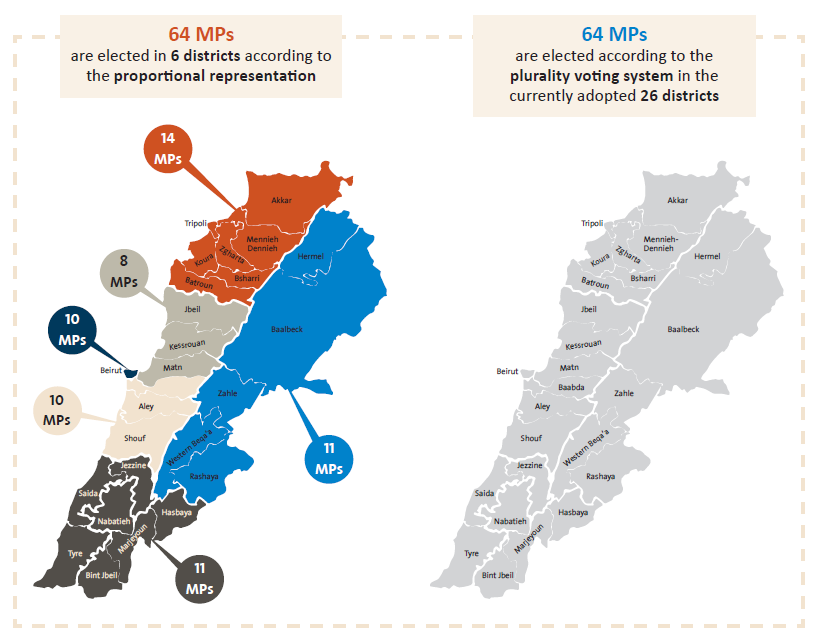 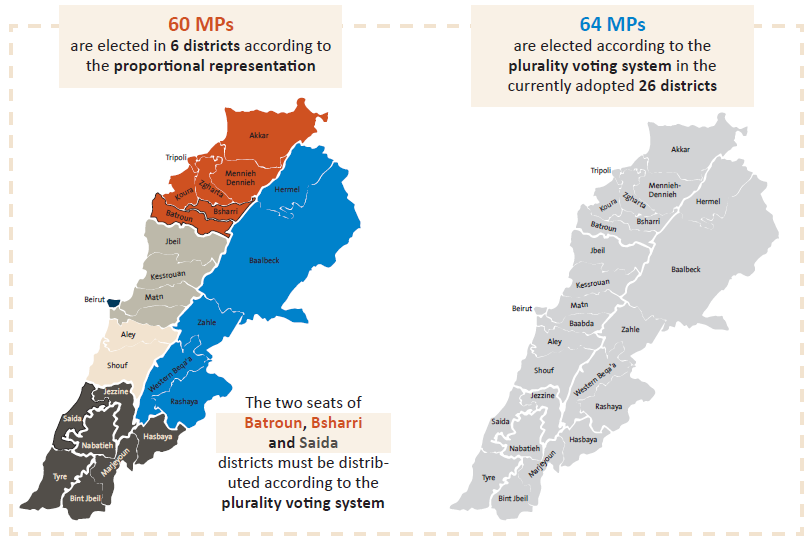 Qualifying Vote
This proposal has not been officially developed. It is a preliminary version approved by the Parliament Speaker Nabih Berri and FPM Chief Gebran Bassil. Its key articles are the following:
• The electors of each sect shall vote within the district to twice the number of MPs according to the plurality voting system. In Jezzine, for example, there are 3 MPs (2 Maronite and 1 Greek Catholic). The Christian electors vote for 6 candidates: 4 Maronite and 2 Greek Catholic, and no Muslim elector votes for any candidate. In Saida, Muslim electors (Shia’a and Sunni) vote for 4 Sunni candidates, i.e. twice the number of seats, and no Christian elector votes. In South Lebanon Mohafaza, the proportional representation is adopted and all electors vote for the lists qualified at the Qada’a level. In this way, Lebanon will have at the first qualified phase of elections 256 candidates of which 128 will be elected in the second phase.
The Last Proposal
As the last proposal of electoral bills, the head of FPM submitted a new bill that is based on the following:
• The voters vote for 64 MPs in 5 electoral districts (the five historic Mohafazat) according to the proportional representation. Every voter shall cast a preferential vote for the candidates of the district he/she belongs. Discussions are held to develop this version so that the 64 MPs will be elected based on the principle of “Lebanon is one electoral district”.
• The voters vote for 64 MPs in 14 electoral districts according to the plurality voting system, provided that each sect elects its MPs. This is a radical modification of the Orthodox proposal. 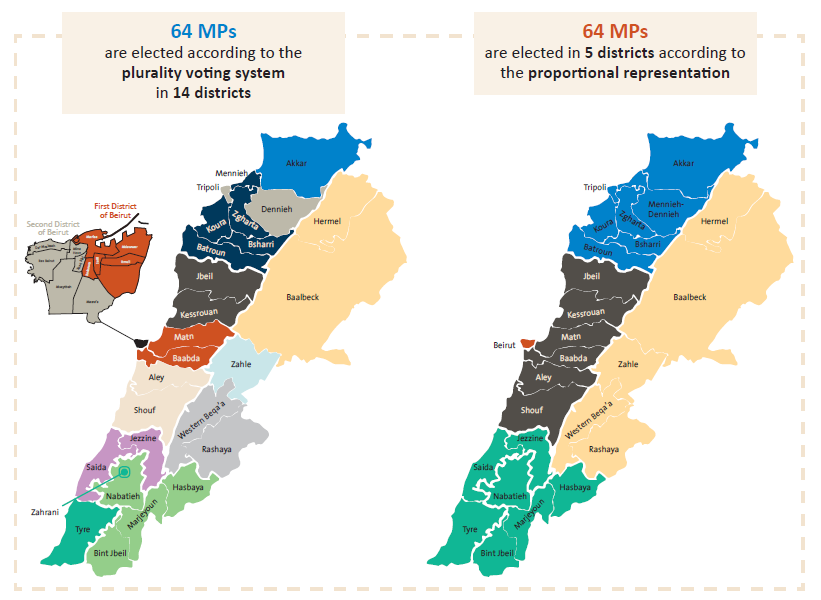 We are less than 80 days away from the end of Parliament’s mandate. We might witness during this period many different versions of parliamentary electoral bills, but what is even more important is to adopt a new electoral law that ensures the validity and the credibility of representation and schedules the elections. So when will the elections be held? In October 2017 or in May 2018?