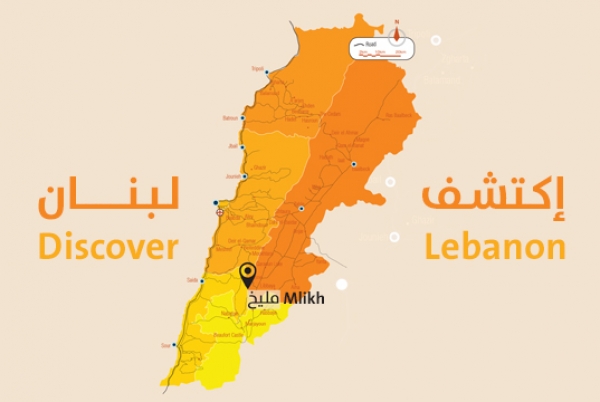 A tranquil town in the Qada’a of Jezzine, Mlikh made headlines when its resident Amal Abou Zeid won one of the Maronite seats in the Qada’a, breaking- although not for the first time- the long established norm that the Qadaa’s MPs should be from the city of Jezzine.

In his book, Names of Lebanese Towns and Villages, author Anis Fraiha suggests that the word is of Aramaic origin and means salinity and a barren land unable to produce crops. However, this does not apply to the town’s fertile lands. It is also possible that ‘mlikh’ is the root of the word ‘malak’, i.e. king.

Mlikh is located in the Qada’a of Jezzine at an altitude of roughly 1000 meters above the sea level. It is 70 kilometers from Beirut and stretches across 400 hectares. The town may be reached by heading from Beirut to Saida to Jezzine then to Kfarhouna or from Beirut to Nabatieh and then to Loueizy.

The people in the town’s personal status register total 2800. However, permanent residents do not exceed 400. There are 250 houses and the town’s sectarian makeup is as follows: 55% Shia’a and 45% Christian (Maronite and a Greek Orthodox minority).

Voters are distributed over the following families:

Local authority is vested in a municipal council of 12 members.

Residents rely on minor jobs and agriculture to earn a living.

The displacement of the residents due to the Israeli occupation in 1982 remains a major concern as the majority of those did not return despite Mlikh’s liberation in 1999. Most of them visit during the weekends or summer vacations.