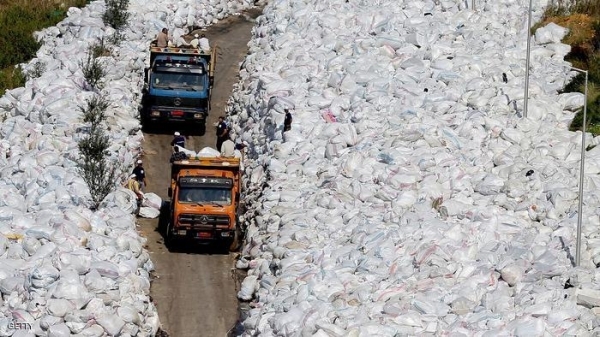 ​Amount of waste and its distribution
According to estimates, the average individual in Lebanon produces roughly 0.9 kilograms to one kilogram of waste every day, amounting to roughly 4500 tons to 5000 tons of garbage throughout Lebanon daily (the resident population is estimated at roughly five million including Lebanese, Syrians, Palestinians and foreigners). The garbage is distributed in the following regions:
2300 tons to 2500 tons, i.e. roughly half the total amount of waste in Lebanon, are generated in Beirut and in 225 towns and villages in Mount Lebanon (under the contract with Sukleen).
300 tons in Saida and the neighboring villages
400 tons in Nabatieh and the rest of South Lebanon
800 tons in the north and Akkar
600 tons in Beqa’a and Baalbeck/Hermel
Composition
Despite a few differences among regions, waste composition is generally as follows:
Organic waste that may be decomposed and converted to compost and can be sold or distributed to farmers as a soil conditioner:  60%
Paper and cardboard: 20%
Plastics: 2%
Glass: 5%
Metal: 4%
The last four types are recyclable materials that may be reprocessed and used in local industries.
The remaining waste is non-treatable and non-recyclable material that should be transferred to environmentally safe landfills and buried according to sanitary and eco-friendly standards. The amounts of waste destined to landfills in Lebanon are therefore estimated at 360 tons to 400 tons per day.
Problem
Despite the large amounts of garbage and the risks they pose to the environment, the Lebanese state has failed to draw up a holistic national plan for waste disposal. Instead, it has adopted several options in certain areas and left the matter up to municipalities in most regions as illustrated in Table 1. This meant that waste has been mostly left untreated and thrown in several random places or even disposed of in unequipped landfills. The multiple management options adopted across Lebanon transform solid waste into an unsolvable problem because all these options revolve around dumping waste either in sanitary landfills or in random sites which would ultimately transform Lebanon into one large dumpsite, at a time when effective management begins with sorting-at-source and recycling. Abiding by sorting and recycling reduces the amounts of waste that need to be buried to less than 10% or roughly 450 tons. Even this small amount may be disposed of and the burial option may be ruled out entirely.
The other side of the problem is the high cost of waste collection and burial which amounts to roughly USD 120 per ton. This cost prevents municipalities from living up to their responsibilities and leaves them to face wider budget deficits and failure to pay the fees required for collection and treatment.
In the absence of sorting and treatment, the closure of the Naahmeh landfill or the failure to find new landfills if contracts are to be awarded to new companies will only mean that the garbage will pile up once again in the streets or in random temporary sites as is currently the case because the identification of long-term sites remains subject to narrow political and regional quotas.