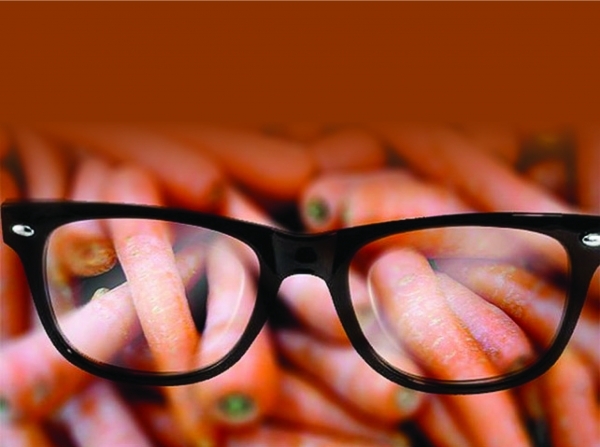 Fact:
Carrots are a good source of Vitamin A, which helps maintain eyesight. But carrots do not actually improve vision, or help you see in the dark, as some parents may tell their children in the hopes of getting their children to eat vegetables.
Carrots contain Vitamin A in form of beta-carotene, which plays a crucial part in vision, bone growth and the overall health of the immune system. Vitamin A also helps protect the cornea, the transparent layer forming the front of the eye, which is essential for good vision. However eating a lot of carrots will not improve your eyesight if your vision problems are not related to vitamin A, no matter how many carrots you eat.  Extreme lack of vitamin A in our diet can cause blindness. In fact, nowadays vitamin A deficiency is the leading cause of blindness. Every year an estimated 250,000 to 500,000 children worldwide become blind as a result of vitamin A deficiency (WHO). Although harmless, consuming too much beta-carotene will cause your skin to become orange.
Carrots are not he only vegetables that contain the essential beta-carotene: sweet potatoes, mango, pumpkins, apricots and cantaloupe are also sources of beta-carotene. The nutrient is also found in milk, cheese, egg yolks and liver. Vitamin A is either derived from animal foods called retinol which can be directly used by the body, or obtained from colorful fruits and vegetables in form of pro-vitamin A carotenoids which are then converted to retinol.
In the Middle Ages, carrots were believed to cure anything from sexually transmitted diseases to snakebites. It was not until World War II that carrots were associated with vision. The British Royal Air Force promoted and announced that a strict diet of carrots helped pilots to see and successfully eliminate Nazi bombers attacking at night. The propaganda was put out to mislead and conceal the fact that the Royal Air Force was actually using a radar which could pinpoint enemy bombers before even entering English territories. At the time France, the UK, the USA, the Soviet Union, Italy, Japan and Germany each had explored and researched radars, but only the British were successful in developing a fully-functioning network which operated 24 hours a day. The British had to make up plausible stories for the sudden increase of enemy bombers being shot down, in response to the story the British public began to grow and eat more and more carrots. They generally believed that eating carrots would help them see better during the citywide blackouts which was very common at the time. Even the Germans were deceived and started stocking up on carrots.
The Radar played a vital role and gave the Royal Air Force an upper hand, which is why they had to keep it a complete secret. The British propaganda greatly contributed to this commonly held belief about carrots. Although carrots won’t improve your visual acuity if you have less than perfect vision, the vitamins found in the vegetable help promote overall eye health.