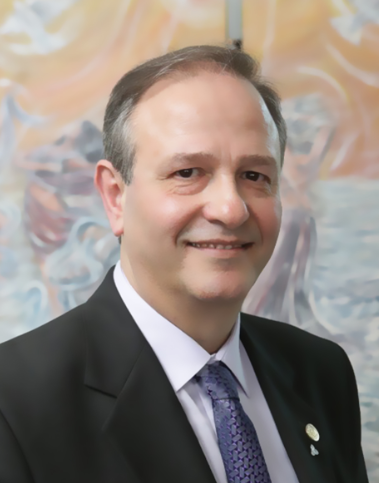 by your father?
I was greatly influenced

by him. I accompanied him on his long journey of painting  murals in 38 churches across Lebanon that included the churches of Beit Shabab, Abrine, Al- Fanar and Ebleh. My first foray into painting was in 1966 at the age of seven. I used to assist him in placing and blending the colors at the Church of Bdadoune. I would follow instructions, for I was the one on the ground while he stood up there painting. We would spend a month or two painting church murals. As time went by, I gained my father’s experience and trust and earned a major role in executing murals for the final nine churches, particularly the Saint Charbel Church of Abrine in 2010 and the Saint Charbel Church of Fanar where the mural bears the signature of myself and my father after all previous murals bear his signature alone. This is how I first plunged into the realm of painting and it certainly was not an easy plunge given the nature, symbolism and immensity of the work we did. Each mural covered 200 to 250 square meters.
Where did you study?
I finished primary school at the Patriarchate School in Zqaq El Blat where my father was an art teacher. I then moved to the Antonine Institute where he also gave drawing classes and stayed there until the end of the secondary cycle. I enrolled afterwards in the Michelangelo Academy of Arts in Sodeco, an art school founded by my father initially in Zahle, and graduated as an Interior Designer. I was studying drawing simultaneously and obtained a diploma in fine arts. In 1985, I graduated as an Architect Engineer from the Holy Spirit University- (USEK) Kaslik. At this stage, I started out my professional career

and started managing and giving courses at the Academy until 2003 when we had to close it down for family reasons.
When did you begin your personal works?
I founded the Vestiges D’Orient Atelier D’Art in Gemayzeh in 1985 and opened a second branch in Naqqash in 2002. When that closed, I reopened another branch in Dbayeh, for I was always keen on having two branches.
What are the themes you focus on in your paintings?
The themes I focus on have been through different stages and changed every decade. The beginning or first stage was with the oriental paintings focusing on the traditions, customs and images of the Orient, hence the name of my atelier, Vestiges D’Orient Atelier D’Art. The paintings were primarily depictions of traditional Lebanese houses. Later I moved to metaphysics depicting themes like life and death, outer-space and the deep sea. The third stage was three dimensional painting and the use of viscid and original substances in order to avoid the duplication of paintings and create creative pieces. The fourth stage was live painting using rapid techniques. I have so far performed 194 live paintings, which means completing an artwork in front of an audience in a short period of time ranging between five and 90 minutes or more, depending on the theme and size of the piece. The most recent painting portrayed the Syrian actor Doureid Lahham.
Have you painted any public figures?
I have and the best among my paintings of public figures are those depicting popes on the papal chair such as Pope Benedictus XVI and Pope Jean Paul II. The painting of Pope Jean Paul II was beautiful, to the extent that Patriarch Mar Bechara Boutros el-Rai took it and hung it in the Jean Paul II Hall in Bkerke.
How many paintings have you made so far?
I was able to count 6000 paintings. The real number is probably higher than that.
Are you working on promoting the art of painting?
I believe that the spread of the art of painting and the discovery and development of talents is necessary. This is the reason I am currently teaching painting. I either give private individual lessons or group lessons for groups made up of five to six students of varying ages. They obtain a certificate after one year of study with an average of two hours daily.
Do you encourage your children to engage in this domain?
I have a boy and a girl and I do hope that they will one day carry the torch. For now, they do not see painting as their goal but I think with time they will follow the path of the family, which began with my father, Asaad Renno.
What are the difficulties that face those who take art as a profession?
Painting cannot be regarded a profession or a primary source of income in Lebanon. Sales are slow because the majority of the Lebanese do not have the money

to buy paintings and well-off people buy their paintings from outside Lebanon instead of encouraging local artists. Therefore, there must be another source to secure our livelihood such as teaching.
Another problem is the faking of paintings which offends art and strips the artworks of their value.
What are your foremost accomplishments?
Besides painting more than 6000 paintings and teaching more than 3000 students over different stages, some of whom have risen to prominence such as Elie Saab and his wife, Salim Chammas, Majed Tannous and Samir Abi Rashed, I have designed the covers for several poetry books and held more than 12 private exhibitions and another 170 jointly with others. I am currently the cultural attaché to the Consulate General of the Republic of Latvia to Lebanon. This position motivates me to increase my contributions to the art scene in Lebanon and the wider world.
What is the difference between mural and live painting?
Painting remains the bigger umbrella for both methods but there certainly is a major difference. Mural painting is a meticulous work that requires a great effort and can take for months while live show painting is on site, is rapid and has many followers.