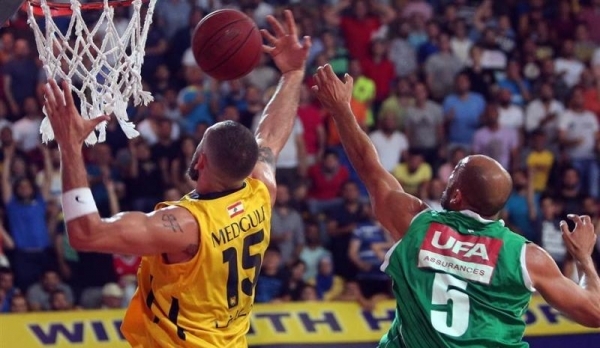 March 1
A mass brawl interrupts the Sagesse-Riyadi basketball game on Riyadi’s court at Manara, leading Sagesse players to withdraw from the game, thus resulting in awarding Riyadi a 20-0 win. Following the brawl, Minister of the Youth and Sports Abdul Muttaleb Hennawi bans fans from entering the stadium.
Former President Michel Suleiman assures he will run again as for presidency to complete what he had started after the six-year term of the prospective president has expired.
Former Minister Major General Issam Abou Jamra launches a new political party called ‘The Independent Movement’, criticizing the positions and actions of General Michel Aoun.
The Popular Nasserite Organization rallies in the streets of Saida in commemoration of the 40th anniversary of Maarouf Saad’s death. The Future Movement joins the rally and Osama Saad holds a telephone conversation with former PM Fouad Seniora. Saad also receives a PSP delegation including Taymour Jumblat and MP Alaa Terro.
A rally in Hamra heading for the Ministry of the Interior and Municipalities urges Interior Minister Nouhad Mashnouq to sign civil marriage contracts and Mashnouq insists that a civil marriage law must be approved first.
March 2
The Lebanese Army takes action to prevent tensions from flaring up in Tripoli and the north after the assassination of Badr Eid, brother of former MP Ali Eid in the town of Kuwaikhat in Akkar.
The statement issued after the seventh dialogue session between Hezbollah and the Future Movement emphasizes the completion of discussions over security and political matters.
Jenan Shattat, Director of the Islamic Makassed School, found dead in Tareeq Jdideh.
The Regie Libanaise des Tabacs et Tombacs offers monetary rewards amounting to LBP 250 million to anyone who reports the location of those shops or warehouses selling smuggled tobacco products.
Customs Clearance Offices go on strike to demand better equipment and less bureaucracy.
March 3
PM Tammam Salam urges the government to convene next Thursday and calls on facilitating the work of the State and shifting away from factionalism. His words came during the launch of the sustainable development strategy at the Grand Serail.
Badr Eid, brother of former MP Ali Eid laid to rest in the town of Hokr Al-Dahri near the Syrian side. Ali Eid and his son appear for the first time since their departure from Jabal Mohsen eight months ago.
Another baby dies after being refused admission to Akkar Hospital either because her family did not have enough money