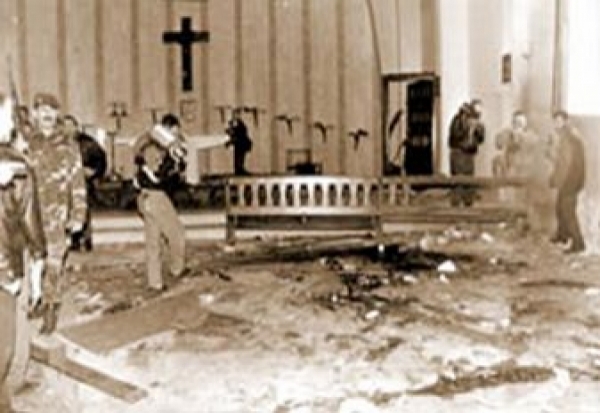 ​Bombing
On the 27th of February 1994, at 9:15 am, an explosion raged through the Sayyidat Al-Najat Church during Sunday mass, which was led by Father Antoine Sfeir, killing 11 people and injuring another 54. The explosion was caused by the detonation of C4 explosives and two 81 mm mortar rounds. Another bomb was found, timed to explode at 10:15 am.
Judicial measures
The Cabinet convened on the same day and decided to refer the crime, its ramifications and those persons who had instigated or participated in it, in any capacity, to the Justice Council, pursuant to Decree no. 4825 dated March 2, 1994. The then Minister of Justice Bahij Tabbara appointed Judge Joseph Fraiha as judicial investigator into the crime.
Political implications
Political positions started to shape up immediately after the bombing. While some blamed the attack on Israel, MP and minister Walid Jumblat held the Lebanese Forces accountable saying “we cannot but link between the church massacre, Al-Saifi bomb and the attempt on Elias Hrawi’s life and between segregation and federalism.”
“I will not accept throwing accusations at Israel this time. I will not accept obscuring the perpetrator. The state should be in charge of security,” commented LF leader, Samir Geagea.
Afterwards, hearsay started circulating about the Lebanese Forces’ responsibility for the attack. On March 10, the Lebanese Army units encircled the LF leader’s residence in Ghedras in Kessrouan following news that the perpetrators took refuge there. Pursuant to Decree no. 4908 dated March 23, 1991, the notification of establishment of the association named The Lebanese Forces in Beirut no. 178 on September 10, 1991 was withdrawn. Later on April 21, 1994, Judge Mounir Honein who was probing into the assassination of Dany Chamoun and his family ordered the arrest of Samir Geagea, after investigations into the attack on the Sayyidat Al-Najat Church revealed that he had a hand in Chamoun’s assassination too.
Trial
Judge Joseph Fraiha issued his indictment on June 13, 1994, upon which the Justice Council chaired by Judge Philippe Khairallah and consisting of judges Hekmat Harmoush, Ahmad Mouallem, Hussein Zein and Ralph Riach began trial work. During the closing sentencing hearing of July 13, 1996, Public Prosecutor Adnan Addoum requested death penalty for Samir Geagea, Jerjes Khoury, Antonios Elias, Rushdi Raad and Jean Shahine and hard labor for life for Fouad Malek and Paul and Rafik Al-Fahl. Addoum predicated his decision on the investigation conducted with the primary suspect in the case, Jerjes Khoury, who reported that the preparations for the operation had begun in Israel and then proceeded in Lebanon over the meetings held periodically in the Lebanese Forces’ staff building in the Zouk area, in the presence of security officials from the party. Khoury later denied his testimony.
In his perusal, Addoum also noted “Samir Geagea was waiting for the situation to change in the Middle East and subsequently in Lebanon and was discontented with the Army’s presence and its full control over the Lebanese territory, particularly in the areas of Kessrouan, Matn and Jbeil, which he believed were his very own spheres of influence. Geagea was seeking the opportunity to crackdown upon the state and its institutions and used to embolden the Lebanese Forces’ officers not to harbor fears for the future because their forces, their security, their members are all at hand. With his security apparatus, he drew up plans and dispatched his members to Israel to hold meetings and gather instructions through a double agent and liaison officer Jerjes Khoury. Since the matter required a large-scale activity that would shake the Lebanese community and re-foment divisions, it was agreed to bomb a church to shock the public and leave the state in a helpless position depicting it as incapable of protecting the Christians.”
Addoum understood that Geagea was the one calling the shots in everything that the Lebanese Forces did or rather its security apparatuses, for although names were changed after the decision of dissolution of militias, things remained pretty much the same in the party. He branded Geagea as the primary culprit responsible for the church attack on the grounds that he planned it, ordered its execution and helped obliterate its landmarks and hid those who were involved in it from justice.
Samir Geagea pleaded not guilty after debating the content of the indictment with respect to the church bombing charges and those of executing actions aimed at altering the constitution in illicit ways. He noted that the indictment was premised on what Jerjes Khoury had said during his initial testimony, arguing that the testimony made by one person should not be a basis for judgment in the absence of other supporting and corroborative evidence.
In its final irrevocable verdict, the Justice Council accused Israel of ordering the bombing of Sayyidat Al-Najat Church so as to deflect attention from the Ibrahim Mosque massacre that unfolded on February 25, 1994 and prevent the Pope from visiting Lebanon. A cell consisting of Jerjes Khoury, Tony Oubeid, Rushdi Raad and Jean Shahine- all LF members- was used as a tool for the crime. Following the dissolution of the militias and the perplexity suffered by the Lebanese Forces’ apparatuses, these members had to shift their services in favor of Israel’s Mossad and maintained contact with Israel, unlike Samir Geagea who had no connection whatsoever with it. Therefore, Geagea was acquitted from the Church bombing, especially that he was definitely not mentioned by Jerjes Khoury as having had commanded the attack. Yet, Geagea and Colonel Fouad Malek were criminalized for establishing, arming and training military factions after the decision to dissolve militias was issued.
Geagea was sentenced to ten years in prison and Malek to three commuted to one and half years. The former was also prosecuted in different cases foremost of which were the assassinations of Dany Chamoun, Elias Zayek and PM Rashid Karami. LF advocates insisted that the church case was fabricated by the Syrian intelligence in collaboration with the Lebanese Army’s Deputy Chief of Intelligence, Colonel Jamil Sayyed with a view to put Geagea behind bars and eliminate the Lebanese Forces from the political scene for challenging the Syrian presence in Lebanon.