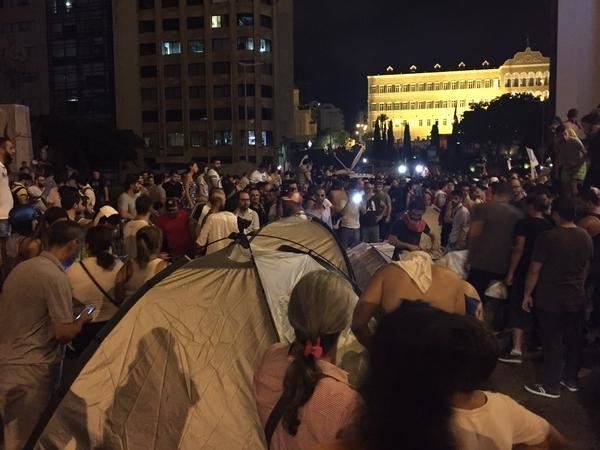 ​The same scene repeated itself, with different players this time, on Sunday, October 18, 2012, on the heels of the assassination of Brigadier General Wissam el-Hassan. During el-Hassan’s funeral in Downtown Beirut, there were calls on the mourners to break into the Grand Serail in an attempt to topple the government. Clashes with the Serail’s police lead to counter calls not to break in but rather stage sit-ins outside the Serail until the demands were met.
Yesterday’s stances
Grand Mufti Sheikh Mouhammad Rashid Qabbani:
“staging sit-ins Downtown and around the Grand Serail was the error that dragged the country to where it is now.” He added after leading prayers: “we would like to tell everybody a free democratic political work is one, which goes through the constitutional institutions, Parliament and the Cabinet, not through street sit-ins, as it is absolutely unacceptable to pose threat to Lebanon’s security and stability… We urge the opposition to act rationally and turn the constitutional institutions instead of using the streets to topple the government.”
PM Fouad Seniora:
“I do respect the protesters’ right to stage sit-ins, but what they are doing is limiting the liberties of people and causing a huge economic loss worth millions of dollars.”
Statement issued by the Maronite bishops:
“It is time to free Downtown and its surroundings so that the capital restores prosperity.”
Carlos Eddeh:
“what’s happening in Downtown Beirut is an occupation of the capital by the forces of opposition. I urge shop and restaurant owners, who closed down their businesses due to the sit-ins staged in that area to return to work as usual.”
Minister Marwan Hamadeh:
“we will thwart the movement of the opposition, much like we have thwarted the sit-ins, which turned downtown to a kermis.”
Former MP Fares Soueid:
“the sit-in is tantamount to a closed building site in Downtown Beirut, and life continues without it, especially that it has failed to achieve all the political gains it has outlined.”
MP Saad Hariri:
“the sit-ins staged in Downtown Beirut devastate the economy and damage the image of Lebanon.”
MP Walid Jumblat:
“they may stay in their tents for months but we won’t let them realize their goal.”

Former minister Suleiman Frangieh:
“the tents set in Downtown Beirut damaged the economy of the Hariris, not Lebanon.”

Former minister Talal Erslan:
“this is by far the most civilized sit-in known to democracy. It has protected the country and prevented the Israeli flag from flying in Beirut’s squares.”

Sheikh Fathi Yakan:
“your sit-in, which gathers people from all sects and movements and political and intellectual schools, will, God willing, foil the American plan just like the resistance debunked in July the myth of the invincible state.”

General Michel Aoun:
“our movement is a surgery that incites temporary pain but cures the patient eventually.”

Sayyed Hassan Nasrallah:
“if the sit-in in downtown Beirut is fruitless, why are there negotiations to swap it with the wired telecom network, and why hasn’t one visitor come to Lebanon without whining about it?””

Today’s stances
Future Movement Media Coordinator Abdullah Baroudi:
“the diverse opposition poles are participating in this sit-in starting with the Future Movement and the Islamic Jama’a and ending with the civil society, in order to overthrow the government.”

Former PM Fouad Seniora:
“no dialogue shall take place before the departure of the government, which is an accomplice in covering the crime. Leave (to PM Najib Mikati) because people don’t want your government.”

Former PM Saad Hariri:
“the government must fall down but with peaceful means only.”

MP Moueen Merhebi:
“I urge protester to stage sit-ins near Mikati’s residence in Tripoli, until he resigns.”

Lebanese Forces Bloc:
“we renew our call for the government to resign immediately and to re-shape power in such a way that secures real stability… and the continuance of popular and peaceful movements is a function of how the situation progresses.”

Future Movement MP Mostafa Alloush:
“what we are doing is an attempt to restore rather than destroy the state… and there were no intentions to break into the Grand Serail.”

March 14 Youth and Student Organizations:
“we support the maintenance of the peaceful sit-ins outside the Grand Serail until the realization of demands, especially the resignation of the government.”

Grand Mufti Qabbani was the only one who maintained his stance, refusing to topple the government by street movements.