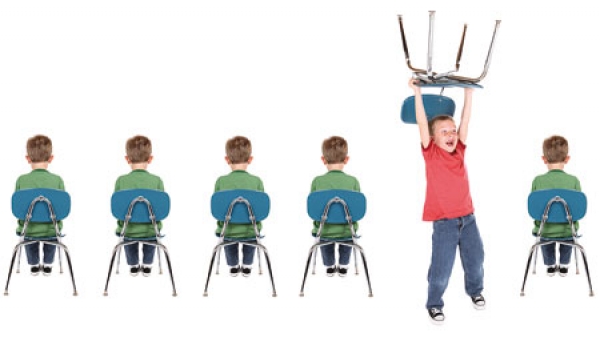 ​The Attention Deficit-Hyperactivity Disorder or ADHD is a disorder, which diminishes our ability to concentrate from early childhood into adulthood, thus preventing us from reaching our full potential in spite of trying, and stifling our abilities to compete, and making us incompetent regardless of our intelligence.
The three main features of ADHD, which become noticeable in early childhood and persist at some level into adulthood, are inattention, hyperactivity, and impulsivity.
As a result of inattention, sufferers fail to notice details, make careless mistakes, cannot focus on work, seem absent minded, fail to follow instructions or finish tasks, are disorganized, distracted, forgetful, lose things, and have trouble studying and learning.
As a result of hyperactivity and impulsivity, sufferers fidget, squirm, cannot sit still, move aimlessly, act restlessly, talk excessively, interrupt conversations, intrude on activities, and have trouble playing with others.
As children grow into adults, about half of them continue to suffer from ADHD.  Whereas, the ratio of ADHD in boys/girls is about 4/1, the ratio in adults is almost one.  In US adults between the ages of 18 and 44, 5.4% of men and 3.2% of women suffer from ADHD.  Although symptoms of hyperactivity tend to diminish with age, the symptoms of inattention persist, seriously hindering adult progress and development.  The somewhat restless adult misses appointments, fails at duties and tasks, loses jobs, experiences financial and marital difficulties, suffers from anxiety and depression, and abuses alcohol, tobacco, and drugs.
Although genetic factors are causal in ADHD, non-genetic factors also play an important role.  The incidence of ADHD doubles or triples in children exposed to lead and in those whose mothers smoked and drank alcohol during pregnancy.  Diabetes and obesity, both in mothers and in children, also seem to increase the risk of ADHD as do brain injury, seizures, and low oxygen during birth.
Imaging studies of the ADHD brain have revealed decreased brain size and dysfunction in both the dopamine and the noradrenaline pathways, which are involved in attention, brain function, motivation, and reward.  Consequently, stimulant medications, which enhance both dopamine and noradrenaline functions, reliably suppress ADHD symptoms and can help victims rebuild their lives.
Diagnosing ADHD in adults is far more difficult than its treatment. The parents of afflicted adults have to be interviewed in order to ascertain that the disorder started in childhood and that the adult symptoms are compatible with the childhood disorder and thus satisfy the approved criteria.  One also has to make sure that drug abuse is not playing a part because certain drugs can mimic ADHD, and adults with ADHD tend to abuse drugs.
Treatments with medicines that enhance dopamine and noradrenaline transmission (stimulants) promptly correct the dysfunction.  Results are evident within one hour, providing dramatic and sustained relief.  Although adverse effects include insomnia, dry mouth, decreased appetite, and anxiety, the overall effects are positive and most sufferers tolerate their medication well and prefer to take it rather than suffer the ravages of ADHD.  Although stimulants may increase the heart rate and blood pressure, they are not associated with increased cardiovascular risks among middle-aged adults.
About 5% of ADHD victims, who use stimulants for recreational purposes, become addicted to them.  Therefore, certain non-stimulant medications are especially suited for these sufferers of ADHD because they do not stimulate the misuse of drugs. Moreover, training in cognitive behavior therapy allows for better control of residual ADHD symptoms and is an important addition to pharmacotherapy.
In sufferers without history of drug abuse, stimulants do not seem to cause addiction or encourage improper use, and are thus considered relatively safe and effective.  Among college students, however, stimulants are used inappropriately for their assumed cognitive-enhancing effects and this is as common as their legitimate therapeutic use.
A therapeutic trial of stimulants or non-stimulants is a good way to confirm or refute the diagnosis of ADHD.  A prompt response without significant adverse effects is a good reason to maintain and monitor therapy.  Long-term effects are not fully known, however, and may change our treatment choices when they become better understood.