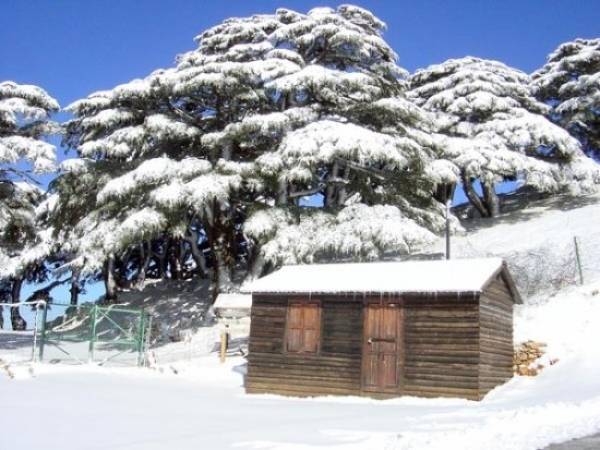 Later in July 2005, UNESCO declared the Shouf Cedars Nature Reserve a “Biosphere Reserve” called the Shouf Biosphere Reserve (SBR) stretching across 440 km2 or approximately 5% of the total area of Lebanon. The SBR includes the Shouf Cedar Nature Reserve in addition to 24 villages to the Shouf side and the areas stretching along the Western Beqa’a line from Mashghara all the way to Qeb Elias.
The Reserve encloses the three magnificent cedar forests of Maasser Al-Shouf, Barouk and Ain Zhalta – Bmohary, accounting for 30% of the remaining cedar forests in Lebanon.
Management
The Shouf Cedars Society, a non-governmental organization chaired and established by the Druze leader Walid Jumblat in 1996, initially managed the Reserve.  After 2000, the Ministry of Environment delegated the management of the Reserve to local committees consisting of municipalities and environment activists, experts and organizations.
Today, the Shouf Cedars Reserve Committee, headed by Charles Njeim, is responsible for running the Reserve in close cooperation with the Shouf Cedars Society, under the umbrella of the Ministry of Environment. The Committee consists of 12 members working with a team of 20 staff who handle day-to-day management and planning.

Biodiversity
The size of the Reserve has made it an optimal habitat for rich fauna and flora. This biodiversity manifests itself in 532 species of plants and trees, some of which are endemic to Lebanon; others are rare or threatened species. In addition, the Reserve is home to 30 species of medium sized mammals (wolves, foxes, hyenas, jungle cats, wild boars, etc) and around 27 species of reptiles and amphibians. Its strategic geographic location has made the Shouf Cedars Nature Reserve a stop for migratory birds, with around 290 bird species passing over it every year.

Ecotourism
In order to promote ecological conservation and raise the awareness of local communities to the rewards of an eco-friendly environment, the Shouf Cedars Nature Reserve has paid special attention to ecotourism. In this context, it has introduced several activities including hiking, biking, snow-shoeing, trekking, bird watching, animal observation, etc. and has trained local young men and women to act as tourist guides and show visitors around. Each year, 70 000 nature lovers and outdoors enthusiasts visit the Reserve through one of its five main entrances. Entrance fees, however modest (LBP 7000 for adults and LBP 5000 for children), cover the staff salaries and contribute greatly to the sustainable development of the Reserve.

In the beginning, local residents had the perception that the state was putting its hands on the area, particularly due to the close connection that villagers usually have with their communal lands. Today however, the revenue generated from ecotourism initiatives has made them more embracing of the concept of nature reserves and more engaged in the protection of their natural and cultural heritage and in sustainable resource management practices.

Achievements
Since its launching in 1999, the Rural Development Program has aimed at fostering patrimonial traditions and local produce. Products and craftworks of the local community were displayed and marketed within the scope of the Reserve while special ateliers were set up to grant certificates in organic food production thus allowing villagers to take part in exhibitions held in the Gulf countries. Sales of honey and other rural produce brought in around USD 200, 000 last year.

In order to better highlight the correlation between ecosystems and livelihoods, the Reserve has introduced this year Cedar Loans targeting all individuals engaged in agricultural, environmental or social efforts and activities that serve the protection and preservation of the Reserve. The size of the loan ceiling was set at USD 3000 per individual.

Tawlet Ammiq is another example of the eco-friendly ventures undertaken by the Reserve to enhance interaction between man and nature.  The restaurant includes solar chimneys and Canadian wells and is designed in a manner that ensures saving electricity. Women from Ammiq, A’ana and the neighboring towns serve at the restaurant as chefs de cuisine, under the supervision of Souk el-Tayyeb.

As part of its risk prevention strategy, the Reserve has also implemented, in collaboration with Italian agencies, a firefighting system which aims at warding off fire hazards.

Changing attitudes towards the Reserve cannot be achieved except by building bridges with local stakeholders, thus involving local communities in the planning, decision making and implementation process, in particular as this process relates to providing seasonal transhumance paths, grazing in special zones, wood cutting, and charcoal production.