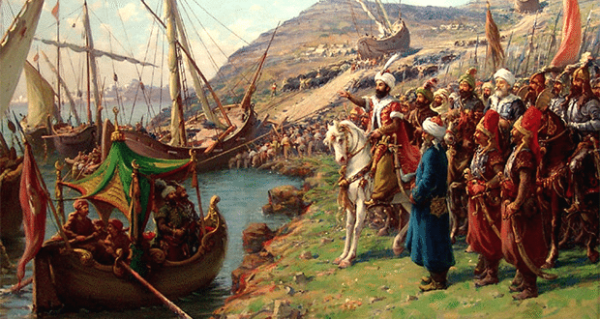 ​History teems with pages on Christian Byzantine leader Koze Mihal, the Beardless, who used to accompany Othaman Ghazi in his invasions. Can that not be considered a proof on Byzantine-Muslim assimilation? Although Turkish historians, such as Inalcik, found no documentation proving that Koze Mihal professed Islam prior to Sultan Othman’s era (1299-1324), the official history of Ottomans holds that he was a Muslim convert.  What were then the factors that led the Bithynians- a Greek Christian people- who had established a frontier empire that spanned for 50 years north of the Black Sea to contribute to the formation of a unified Christian-Muslim state?
In 1982, Inalcik published an article acknowledging the importance of the mass migrations of Turkmen tribes to Anatolia and highlighting the significance of the Holy War doctrine as the unifying force ‘that has lead mercenary gazis to dominate and enslave primitive human groups.’ He thus endorses the premise that it was gaza which provided the raison d’être for Ottoman expansion. It is believed that the poems of Tajeddine Ahmedi, one of the greatest poets of the 14th century, set the beat of that stage.
However, how does Inalcik justify the conversion of Mihal to Islam at a time when the Ottomans were a frontier empire famed for its treatment of all creeds and races as one?  Inalcik suggests that Mihal was both a gazi and a Christian and that the Holy War and settlement were the two dynamic elements in Ottoman conquests, arguing that the administrative systems adopted in the new conquered territories were inspired from the Seljuk model. This assumption lead eventually to divorcing the doyen of Ottoman studies from the works of Gibbons which endorse the non-Turkish origins of the Ottoman Empire’s cornerstones.
Another critique of Gibbons appeared in a 1947 lengthy study by Greek scholar George Arnakis. Gibbons addressed the major weaknesses of Wittek’s thesis by emphasizing that the connotation of the title gazi in that context did not mean that the early Ottomans were motivated by the goal of converting the Bithynian Christians, but rather by amassing plunder, slaves, and booty. Arnakis viewed that the growth of the early Ottoman state can be attributed to a large extent to its absorption of the Greek population of Bithyniya.
On the other side, a Marxist-oriented book discussing the beginnings of the Ottoman history was published. Written by Ernst Werner, the book first appeared in 1966 and was republished in two revised editions in 1972 and 1985 respectively. The book critiqued historiography in Turkey but its exaggeration of Marxism-Leninism has prevented it from having the intended impact. The third exception is the American Byzantinist, Speros Vryonis whose book, The Decline of Medieval Hellenism is considered a landmark in the Ottoman issue. Vryonis set out to analyze a variety of Byzantine and Turco-Islamic cultural traditions. He underlined the fact that by the time of the emergence of the Ottomans, the process of Islamization followed by Turkification had been in progress for over two hundred years. He added that the semi-nomadic Turkic life was ideally suited both to conduct gaza and raiding and that it was this fact rather than any zeal for Islam which motivated the early Ottoman conquests.