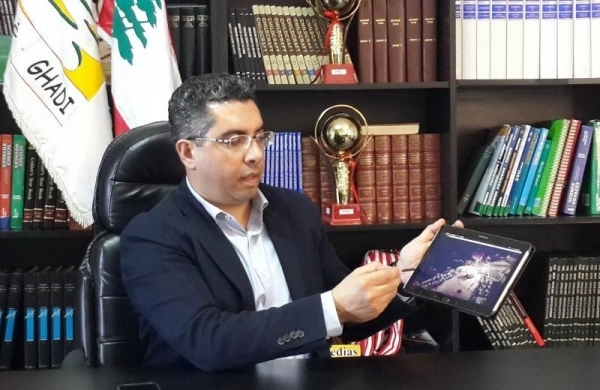 ​
The name of the association was chosen to express ‘tomorrow’ and the possessive ‘my’ was added to emphasize an individualistic tomorrow, for the Ghadi association believes that the individual is the backbone of the community, not vice versa.  Under the chairmanship of Mr. Fadi Ghanem, the association operates under three primary banners: in the first place, the environment, then sociology and culture. The Ghadi association hopes to disseminate environmental knowledge and doctrines to all members of community.
Beginning and projects
The Ghadi association was started by a group of young people who, although from different specialist backgrounds, shared a common concern and financed the organization using their own money. Upon establishment, Ghadi consisted of 16 members but has grown to 46 members today. One of its earliest projects was geared towards assisting senior villagers, particularly in Shouf and Aley. Landowners were encouraged to pick whatever kind of crops they believed would ensure their livelihood. The association volunteered to plant the chosen crops for the landowners provided that they looked after the crops. The project spanned four years until a wave of wildfires raged across the area, destroying both the produce and the project.
In 2002, under the tenure of Minister Michel Moussa, the Ghadi association launched in cooperation with the Ministry of Agriculture the “Green Student, Green Teacher, Green School”-project. This project aimed to develop environmental clubs in different schools, overseen by Ghadi, with the hope of increasing environmental awareness among young people and developing the students’ sense of responsibility towards the importance of preserving the environment.
That same year, Ghadi developed an ‘educational environmental nursery’ in the town of Bmekkin in Qada’a Aley. In cooperation with the schools and municipalities in the area, students would attend the facility and benefit from the available resources and expertise to plant pine, cedar and oak seedlings. The nursery produces close to 4,000 seedlings annually and is considered an exemplary site to harmonize environment with education and strengthen the ties between students and their land. As the nursery expanded, Ghadi hired two permanent employees to handle its affairs and look after the plants. 30,000 seedlings were lost in the July War of 2006.
Thirteen years ago, Ghadi was one of those who spearheaded efforts to urge the establishment of an environmental public prosecution. Its demands have finally been met. The environmental public prosecution set up recently allocates a general environmental attorney for each Mohafaza and entitles him to tackle environmental affairs and to file lawsuits after outlining clearly and in detail the crimes and offenses committed against the environment, including, inter alia, seaside and riverside encroachments as well as all environmental violations. The Ministry of Environment has also developed a register list all environment-related rulings and verdicts and an article was added to the law,
stipulating the introduction of an environmental police , the functions and workforce of which are to be decided pursuant to a decision issued in the Cabinet upon the proposal of the Minister of Environment.
Ghadi’s website has recently introduced Ghadi News, a new feature dedicated to provide around-the-clock coverage of environmental news (70%) in addition to other news concerned with health, technology, economy, education, culture and other topics from around the world (30%).
Flower of Salt
The Ghadi association is the only body in the Middle East to have ever cast light on the Fleur de Sel, or “flower of salt”, a rare and expensive form of pure salt containing 84 kinds of minerals. Lebanon began to collect the salt from the sea pursuant to an initiative launched by Green Hand in Aley within the framework of its environmental and developmental project aimed at providing alternative crops and natural resources and harnessing them while at the same time employing the labor force.
Fleur de Sel is harvested twice a year, when the sea calms down completely amidst dry northerly winds. During this period, the salt appears on the surface in the form of soft gleaming crystals. It has a distinct taste and a unique composition, lacking sodium but rich in potassium. Fleur de Sel is popular around the world but is produced in limited quantities, with each kilogram costing between USD 40 and USD 200, depending on the quality, size and luster of the crystals. The smaller and softer the crystals, the higher the value.
Challenges
Pilot and community projects rank highest among Ghadi’s goals. The association also hopes to expand its footprint in Lebanon and the rest of the Middle East, particularly through its electronic website and environmental news bulletin. Unsurprisingly though, security-related events always take precedence over environmental news and activities.
In addition, the association reports that the projects financed by donors are usually subjected to certain quotas not to mention that the budget of the Ministry of Environment is tied to political polarization. There is a number of NGOs whose budget exceeds that of the ministry. Although funding is an ongoing concern, Ghadi’s management has emphasized that the association does ask for support from anyone thus refusing to be dependent on a certain source especially that the environment, like all other sectors in Lebanon, is a subject of political polarity. “The association extends its help to everyone but it would never compromise its principles.”
The Ghadi association has organized several awareness campaigns on H1N1, swine flu and many other diseases. It conducted meetings with different Mukhtars and heads of municipality to explore ways of enhancing cooperation, educating people and bringing environmental matters to the forefront.
Complaints are not uncommon inside Ghadi over the relevant authorities’ neglect of environmental matters. The lack of maintenance of firefighting helicopters is one such example, which undermines the state’s participation in fighting forest fires. The failure to supply the Civil Defense with gear and equipment rubs salt into the injury. The subjects that necessitate exigent and speedy follow up are too many to count and it is high time that the state gave the environment the attention it deserves.