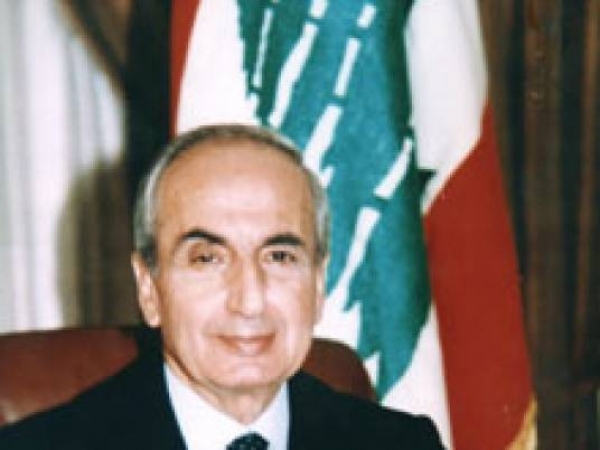 ​Pre-election
President Amin Gemayel’s term of office expired on September 23, 1988 without the election of a successor to the presidency. Pursuant to his constitutional powers, which were later lost in the Taef Accord, Gemayel formed a military government that consisted of members of the Military Council and was headed by the then Army Commander Michel Aoun.
The attempts to elect a new president did not stop, but the persistent political divides and the alarming rise in military actions, particularly after Aoun’s declaration of the Liberation War against the Syrian regime, aborted the efforts. Still, the deadlock prompted the activation of Arab and international initiatives that were all geared towards resolving the crisis in Lebanon. Consequently, Lebanese MPs were brought together in the city of Taef in Saudi Arabia where they agreed on a number of political, economic and security reforms. The Taef Accord laid the foundation for a new pact among the Lebanese; rather it improved the national pact of 1943. In response, General Michel Aoun issued a decree dated November 4, 1989, dissolving Parliament and calling on electoral bodies for new elections. Everybody knew that holding the elections at that particular time was not only very difficult, but also practically impossible. Aoun justified his decree by arguing that Parliament had been elected in 1972 and had thus extended its own term unduly and that MPs had legitimized the Syrian occupation.
Election session
Parliament discarded Aoun’s decree and MPs convened on November 5, 1989 at the Qoulayaat airport, north of Lebanon, where they first re-elected Hussein Husseini as Speaker of the House, then approved the Taef Accord with the consent of 58 MPs. Farid Joubran, Hassan Rifai and Chafik Badr had reservations about the Taef Accord.
Afterwards, MPs moved to elect a new president of the republic and the competition was limited to three candidates: René Mouawad, Elias Hrawi and George Saadeh.
In the first round, Mouawad gained 35 votes, George Saadeh 16 and Elias Hrawi five  votes in addition to two blank ballots. After Hrawi and Saadeh announced their withdrawal in the second round, Mouawad won by 52 votes, a scenario that was pre-planned and agreed upon during the Taef meetings. During the same session, Mouawad took the oath and appointed Salim el-Hoss to form the government. Aoun did not acknowledge the election results and considered Mouawad a former MP, a stance that was also encouraged by Iraq on grounds that Mouawad was pro-Syrian. On the other hand, Damascus declared support for Mouawad and laid down two conditions for the withdrawal of its troops from Lebanon: the withdrawal of Israel from South Lebanon and ending the war.

Assassination
On November 22, Lebanon’s National Independence Day, President René Mouawad held a reception to mark the occasion at the Grand Serail in Sanayeh. After the ceremony when Mouawad was on his way back to his residence in Ramleh Baidah, a bomb was detonated near the Raml el-Zareef High School, shortly after his departure from the Serail. The explosion targeted his motorcade and killed him immediately. 11 other people were also killed in the attack and another 39 were injured.

Speculations
Three potential scenarios were raised over the assassination:
- Explosives were planted inside Mouawad’s car, which has a low probability of being true and this scenario aims to hold the Syrian Intelligence directly accountable for the assassination;

- A car laden with 250 kilograms of explosives was detonated by a remote control the moment Mouawad’s motorcade was passing;

- An explosive device weighing 250 kilograms was blown up inside an empty room on the premises of the Raml el-Zareef High School.

Responsibility
Conflicting statements and opinions arose as to the identity of the perpetrators behind the operation. An accusing finger was pointed at the Syrian Intelligence as it had held the actual responsibility for the victim’s safety. It was later said that Syrian Brigadier General Jameh Jameh, a chief intelligence officer, was behind the assassination as he had headed the group in charge of the convoy’s security and he was also responsible for the choice of its route.

In contrast, Pro-Syrian parties accused Aoun, the Iraqi regime and Israel for they had challenged the Taef Accord, which reinforced the Syrian influence in Lebanon.

In the past few years, news were circulating that the assassination was plotted in coordination between Ghazi Kanaan, Chief of the Syrian Intelligence in Lebanon, Abdul Halim Khaddam, the Vice President of Syria and the then business tycoon Rafic Hariri. The three wanted to get rid of Mouawad, who had shifted his stances and become much stricter towards national affairs and the relationship with Syria after his rise to power. They wanted to replace him with Elias Hrawi so that Hariri could later assume the prime minister’s office and become the actual ruler of the country, backed up by the Syrian regime.

Mouawad’s family who at first held both Aoun and the Iraqi regime accountable for the assassination, backtracked on their position after the withdrawal of Syrian troops from Lebanon in April 2005 and instead accused Syrian Intelligence, arguing that Mouawad was killed for refusing to bend to the Syrian will and to violate Lebanon’s sovereignty.

René Mouawad: MP, Minister and President of the Lebanese Republic
René Anis Mouawad was born in Ehden in 1925. He obtained a degree in law in 1947 after which he engaged in politics by running as a parliamentary candidate on Hamid Frangieh’s list in 1951. Although luck did not favor him that year, Mouawad ran on Hamid Frangieh’s list again in 1957 and was elected the deputy of Zgharta. He was re-elected in 1960, 1964, 1968 and 1972.

On the ministerial front, Mouawad was appointed Minister of Post and Telecommunication under the Rashid Karami government and served from October 31, 1961 to February 20, 1964. He was also Minister of Labor under the same government from January 15, 1969 to November 25, 1969. Under Shafeeq Wazzan, Mouawwad assumed office as Minister of National Education and Fine Arts between October 25, 1980 and September 29, 1982. He was elected the President of the Republic on November 5, 1989.