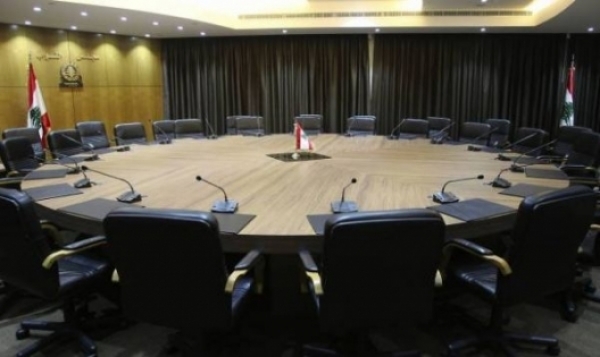 Circumstances surrounding the creation of the National Dialogue Committee
As battles intensified and expanded across Lebanon, crippling the government and the institutions, belligerent parties engaged in negotiation rounds under the mediation of the Syrian Minister of Foreign Affairs, Abdul Halim Khaddam. The mediation lasted eight days and included meetings with President Suleiman Frangieh at the presidential palace in the presence of several ministers and with Grand Mufti Hassan Khaled at his residence in Aramoun where PM Rashid Karami, Chairman of the Palestine Liberation Organization (PLO) executive committee Yasser Arafat, Head of the PLO Military Department Zouhair Mohsen, Head of the Department of Information Yasser Abed Rabbo, Chief of the Revolution’s Security Apparatus Abou Hassan Salameh and Iyad Abdul Latif joined with Khaddam and the Grand Mufti. From Aramoun, Khddam, Arafat, Karami, Mohsen and Salameh headed to the Grand Serail and convened with the then Interior Minister Camille Chamoun and Finance Minister Adel Osseiran. At the end of the meeting, PM Rashid Karami made the following statement:
- “In order to consolidate security, establish stability and return to normal life, it was agreed that:
- Starting 05:00 pm, all militants shall withdraw from Beirut and its suburbs and the zone shall be completely demilitarized by removing all checkpoints, military posts and arsenals.
- All acts of violence shall cease immediately in all regions.
- All parties shall free their captives in all regions.
- The Internal Security Forces shall resume their responsibilities immediately in all regions (as PM Rashid Karami and most of the Islamic leaderships were against the deployment of the Army, on the grounds that it was biased towards Christian militias).
This mechanism was later completed and enshrined during a meeting held with President Suleiman Frangieh at the presidential palace, where it was agreed to form a national committee for dialogue.

Tasks and Members of the National Dialogue Committee
The government believed that the National Dialogue Committee represented national unity and was tasked with “fulfilling the hopes of the Lebanese through an action plan comprising all the tenets and principles under which we will all cooperate for the welfare of this people and the sovereignty of this nation.” The committee consisted of 20 members representing all the Lebanese sects and parties. The members were:
- Kamel Al-Assaad (Speaker of the House)
- Rashid Karami (Prime Minister)
- Camille Chamoun
- Abdullah Al-Yafi
- Saeb Salam
- Majid Erslan
- Philip Taqla
- Ghassan Toueiny
- Kamal Jumblat
- Raymond Eddé
- Pierre Gemayel
- René Mouawwad
- Rida Wahid
- Khachik Babakian
- Abbas Khalaf
- Elias Saba
- Najib Qaranouh
- Assem Qanso
- Edmond Rabbat
- Hassan Awadah

Stances on the committee
The positions of the Lebanese on the National Dialogue Committee were divided between advocates and opponents. The national and progressive parties chaired by Kamal Jumblat exhibited a positive response and stated that they would participate in the work of the committee despite their reservations. The Phalanges also expressed tacit approval.  Conversely, the method used in the formation of the committee was opposed by MPs Hussein Al-Husseini and Elias Skaff and the Baath Party. Despite the great hopes pinned on the committee’s efforts in ending the war and laying the foundations of political reform for the Lebanese regime, the outcome fell short of people’s aspirations. After nine meetings, the Cabinet took charge of the political reform issue in its session held on November 16, 1975, ending indirectly the work of the committee. ‘Is the crisis solved? Is everything over?’ were among the typical questions raised by local newspapers, namely An-Nahar. But those were misplaced questions because the crisis had grown beyond the problem-solving capabilities of a committee or a local body, taking on thorny regional and international dimensions. Thus, the committee failed its mission and the war continued, entailing the birth of another dialogue table in October.

Geneva and Lausanne Dialogue Conferences
Despite the persistence and exacerbation of the war, the dialogue did not stop. Ten years after the establishment of the dialogue committee, it was agreed among contending parties to convene a dialogue conference in Geneva, Switzerland, on October 31, 1983. The conference concluded on November 4, 1983, but to no avail. Discussions were resumed to hold another dialogue session, which eventually materialized in Lausanne, Switzerland, taking place between the 12th and the 20th of March 1984.

The dialogue was sponsored by the Syrian Minister of Foreign Affairs, Abdul Halim Khaddam, and the Saudi Minister of State Mohammad Ibrahim and this second conference was not totally fruitless, for it ended it up issuing several decisions including the formation of a national unity government under Rashid Karami. Yet, the Civil War continued in different forms and under different circumstances.

Berri’s dialogue table
Against the deterioration of the political and security situation following the assassination of former PM Rafic Hariri and as a group of politicians boycotted the then President of the Republic Emile Lahoud, Lebanon plunged into an impasse. In order to break the stalemate and solve the disputes, Speaker Nabih Berri called for a national dialogue roundtable. After nine sessions which took place between March 2 and November 24, 2006, dialogue concluded once again without any actual outcomes apart from the agreement over the disarmament of Palestinian camps.

Baabda’s dialogue table
Soon after his election as President of the Republic in May 2008, Michel Suleiman resumed national dialogue between rival parties. Under his sponsorship, dialogue sessions kicked off in Baabda on September 18, 2008 and touched on the same issues discussed previously, particularly the defense strategy and the weapons of Hezbollah.

After 19 sessions, the last held in May 2014, dialogue concluded after the expiry of Suleiman’s presidential term. Many political forces had boycotted the sessions including Hezbollah and the Lebanese Forces.