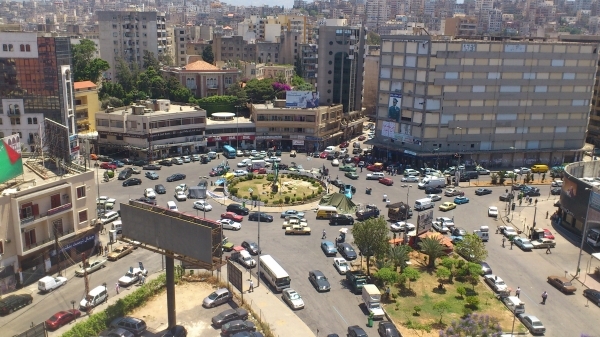 Among these projects was the 1960 Permanent International Fair, Tripoli, renamed in 1991 the Rashid Karami International Fair. Since the project was never brought to full fruition and only a small part of the Fair complex was completed, the government proposed a few years ago the establishment of a Special Economic Zone in the city, hoping to provide it with the much-needed economic boost. It remains to be seen whether the project will materialize or whether Tripoli will continue to suffer from a lack of effective development.
International Fair
The aim of the Tripoli International Fair was to ‘acquaint people with the resources and products of Lebanon and other Arab and foreign countries and to introduce traders and industrialists to the progress unfolding in the various production fields, as well as to present a real image of Lebanon’s economy in the sectors of commerce, industry, agriculture and services and to serve the said sectors.’  It also aims to ‘highlight the characteristics of Lebanon and to pave way for direct communication among Lebanese, Arab and foreign producers, importers and exporters.”
However, the fair was no put fully into operation and the completed works included only a few structures and a hotel while the basic facades and buildings remained unfinished. An all-out war broke out later in Lebanon, delaying completion and throwing the project into oblivion. The fair has since become a small entity merely running the hotel and other minor futile activities that fail to realize the economic development sought after in Tripoli.
Tripoli’s Economic Zone
Approval of the law
The government approved in June 2005 a draft law on the establishment of a Special Economic Zone in Tripoli but it was not until September 5, 2008 that the draft law was passed pursuant to Law no. 18 dated September 5, 2008.
Objective and exemptions
The purpose of the Tripoli Special Economic Zone is to carry out investment projects pertaining to trade, industry, services and stockpiling as well as to other investment activities, excluding tourist services. The investment project executed within this zone shall be exempt from customs duties, including the minimum rates of duty, as well as from domestic consumption taxes, Value Added Tax, import and export duties and income tax on the business profits generated within the economic zone provided that the capital of the business in question is at least USD 300,000 and that the Lebanese account for at least 50% of its manpower. The salaries and wages of employees shall not be subject to income taxation and buildings shall be spared the licensing fees and both built property taxes and land taxes.
Management of the Tripoli Economic Zone
​The management of the Tripoli Economic Zone is assigned to a special body operating under the Prime Minister and known as the General Assembly of the Tripoli Economic Zone. The body has a legal character and enjoys financial and administrative autonomy. It is subject neither to the provisions regulating the work of public institutions nor to oversight from the Central Inspection or the Civil Service Board and is only exposed to the Audit Court’s posterior control.
The assembly’s board of directors consists of a chairman and six members from both public and private sectors, all of whom are appointed by a decree for a renewable five-year term of office.
The assembly works towards developing the economic zone, attracting both Arab and foreign investment and encouraging international trade transactions by:
Devising plans and programs pertaining to the projects and drafting administrative regulations;
- Delegating legal or ordinary people- Arabs or foreigners- to invest in and operate the zone for no longer than thirty years;
- Establishing licensing conditions for prospective investment projects and approving the licenses;
Monitoring the premises, equipment and materials uninterruptedly;
- Putting forth the master plan concerned with the buildings and infrastructure of the economic zone after approval from the Higher Council for Urban Planning.
Revenues
The Tripoli Economic Zone generates its revenues from:
- The allocations earmarked in the Public Budget;
- The funds brought in from its activities;
- The funds generated from the management of and investment in the zone;
- Donations and miscellaneous revenues.

Structure and Staff
The Tripoli Economic Zone personnel is distributed across four directorates including fifteen departments:

Although the law stipulating the establishment of the Economic Zone and the implementation decrees were issued more than five years ago, the economic zone is “still inexistent” and a critical question remains: Will the zone encounter the same fate as the Fair and will Tripoli continue to live off unrealized promises of development and economic prosperity?