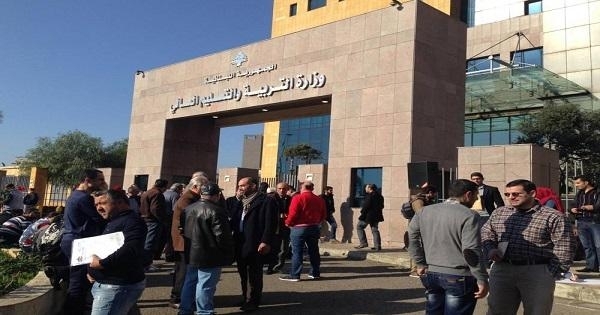 Start of impasse
Since early 2014, the Union Coordination Committee, which consists of civil servants and of teachers from both public and private sectors, has escalated demands for the approval of the new public sector’s salary scale. Several strikes had been staged in schools, ministries and state offices and departments for this purpose and the UCC had threatened to boycott both the proctoring and the marking of official exams if their demands were not met. The Minister of Education and Higher Education scheduled the official Brevet examinations to start Saturday, June 7, 2014 then the Baccalaureate examinations in its four branches ending on June 25.
Holding exams after delay
As the date of examinations became closer, teachers refused to moderate their position and to partake in proctoring. Since the Minister of Education was equally uncompromising in deferring the date of exams, the search for solutions became a priority.  During a press conference held at the Ministry of Education and Higher Education on June 2, 2014, Education Minister Elias Bou Saab brought forth the three options available following his meeting with the UCC. The options were:
- Holding the exams as scheduled if agreement over the salary scale was reached, which seemed highly unlikely in light of the circumstances;
- Postponing the exams for five days hoping that Parliament would approve the salary scale in the meantime;
- If no agreement was reached over holding the exams on the adjourned dates, the Ministry would, out of respect and consideration for the interest of the students and their families, conduct the exams, namely the Baccalaureate exams, in an unprecedented manner because universities are expected to open their doors in August.
Responding to questions from journalists, Bou Saab said “I have ruled out the possibility of granting pass statements at the moment because this is a bitter-tasting medication that the Cabinet is unlikely to use unless all other options have been exhausted.”
Hence, the exams were put off from Saturday, June 7, until Thursday, June 12. They were then delayed another 24 hours, until finally teachers resigned themselves to participating in  the exams, stressing that the agreement involves proctoring only and that they shall not bend to pressures from the Education Minister to grade the exams as well.

Delayed marking
Following the end of the exams and the lapse of several weeks without achieving a solution, efforts were renewed to overcome the deadlock and issue the results. The UCC maintained an intransigent position on exam grading and the Education Minister seemed to support its position. However, as time started to run out fifty days after the end of the exams and as the scholarly year, in the universities abroad in particular, was approaching, Education Minister Elias Bou Saab kicked off a series of meetings with the various party education offices to discuss an exit that would facilitate the initiation of grading if the approval of the salary scale was not possible, but to no avail. With the negotiations hitting snags, Bou Saab brandished the possibility of either backtracking on his position on pass certificates or counting on school grades rather than on the officially graded exam results to allow students’ admission to universities, and once the official exams had been graded, those students who passed the official exams would continue to pursue higher education and those who failed would be sent back to school. Minister Bou Saab kept postponing the latter decision for weeks until he finally discarded it altogether and opted for granting pass certificates to all applicants should the UCC insist on boycotting grading.
Although Bou Saab had obtained authorization from the Cabinet to proceed with pass certificates, he decided to wait a little longer and to give the UCC a last-ditch chance to accept to grade the official exams, especially that it had become known to everyone that there were no signs of any parliamentary session to approve the scale in the near future, which might put the entire scholarly year at stake. Impasse and negotiations lingered until Saturday, August 16, 2014 when Education Minister Elias Bou Saab announced in a press conference his issuance of pass certificates to all holders of documentation proving their entry to official examinations. Bou Saab held UCC accountable for aborting the negotiations and reaching this stage, stressing that his decision was final and irrevocable.
Pass statements: what do they mean?
The decision of Education Minister Elias Bou Saab may be considered a precedent during Lebanon’s peacetime since 1989. However, prior to that, during the years of war, students did receive similar certificates due to the impossibility of holding the official exams under the then precarious circumstances. This decision implies the success of all the candidates who applied to sit for the exams, an option that would not have been possible if the examinations were graded and students were evaluated on their merits.
However, although grading would have resulted in the failure of some students, the repetition rates would not have been high. According to the results of the official exams held in previous years, the repetition rates vacillated between 20% and 25% maximum. Thus, granting the pass certificates would allow in practice the success of roughly 9000 Baccalaureate students and their transition to higher education and of roughly 20,000 Brevet students and their entry to secondary schools.
Hence, contrary to the misconceptions held by many, the pass certificates are not a major catastrophe because the majority of students who under normal circumstances would not have passed are currently in middle school and their lack of merits which was forgiven this time will be tested again when they reach the secondary stage and sit for official examinations anew to qualify for higher education.
The controversy then revolves only around the 9000 Baccalaureate students only. But even those may choose a college major in line with their preferences and the kind of career they want to pursue and therefore perform better than they did in high school.
Below are the results of the Brevet and Baccalaureate official exams, in both regular and exceptional rounds, between 2009 and 2013:
2013
63,400 students sat for the official Brevet examinations, of whom 44,692 or 70.5% passed and 18,708 failed.
42,234 students sat for the official Baccalaureate examinations in its four branches, of whom 33,010 or 78% passed and 9,224 failed.