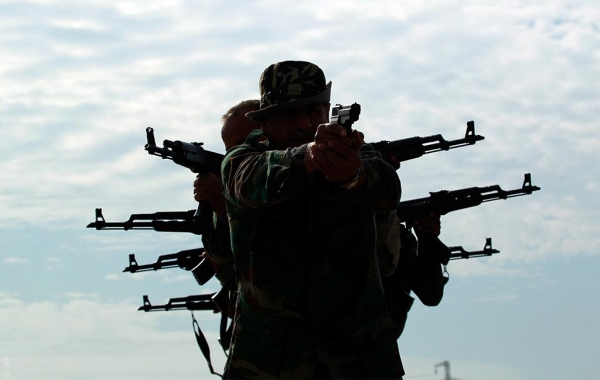 Khalil Ibrahim Salem, son of Ibrahim Salem and Mserra Aboud, was born on December 23, 1928 in Bterram, in the El Koura district of northern Lebanon.

Khalil began his elementary education in Aba National Laic High School and graduated in 1946 from Tripoli’s National High School. The family was not able to afford his college fees so Khalil worked as a teacher in an elementary school for one year, and then enrolled at Aleppo Junior College, a two-year American institution.

In 1948, after completing his freshman year, he accepted a one year clerical position with the Iraq Petroleum Company (I.P.C.), which he joined again in1950 after his graduation from Aleppo Junior College. In 1951, he joined the American University of Beirut and accepted a part time job with the United States Information Services (U.S.I.S.) which made him very interested in the financial problems of Lebanon and thus he decided to study economics. He received his B.A. in 1953, and entered the graduate school at AUB and worked as an economic analyst for the American Embassy in Beirut. In 1955, he graduated with an M.A. in Economics, and in the fall of 1958 he entered the graduate school of Vanderbilt University in the United States. Khalil returned to Lebanon in 1960, and in addition to his full time job as a senior economic analyst at the American Embassy, he worked as an assistant professor at AUB. Khalil returned to Vanderbilt in 1961, and his Ph.D. dissertation was entitled Credit and Economic Growth in Lebanon.

After finishing his Ph.D., Khalil wanted a position which would allow him to be more creative and make full use of his academic ability. So, in 1962 he started at the American University of Beirut as a professor of economics, the post he retained until 1967. He had great knowledge in the field of economics and finance, and his qualifications as an expert were manifested by his many publications, among which were: The Economy of Lebanon, Basic Data and Information, The Credit System and Economic Growth in Lebanon, to name a few.

He was appointed Director General of Economy in March 1966 and Governor of the World Bank for Reconstruction and Development on August 15 of the same year. After two case studies he organized a comprehensive new tax which was later rejected by the Lebanese Parliament.

Khalil who was very keen to make all his decisions according to law and not on the basis of political power, was able in a relatively short time to generate a new spirit and set in motion a process which turned the Ministry of Finance into a modern and efficient administration, where he built an outstanding relationship with his subordinates. Local newspapers referred to him as “The Honest Guardian of Public Funds”. When the Civil War broke out in the summer of 1975, and the country became divided and scattered, Khalil continued to move between the scattered fighting regions, and acted as a link between different sides, as he was especially respected and trusted by all. Also, he managed to ensure a loan from the government to AUB to prevent its closure after the financial crisis it suffered during the war. At that time, the Ministry of Finance was the only government department functioning properly.

On Friday, July 30, 1976 at about 9 am., while Dr. Khalil Salem was driving his Peugeot across the Jeanne d’Arc Street on his way from his Clemenceau residence to Banque du Liban, four gunmen clad in civilian attire in an anonymous car intercepted him. Two of them jumped into Salem’s car and the other two followed them in another car. Efforts undertaken to set Salem free were futile and he was found killed in the trunk of his car on Monday, August 2, 1976.

Colonel Antoine Dahdah had information that Salem might be abducted and even terminated and warned him about the threat two months before the incident. Yet, Salem refused to leave western Beirut as per Dahdah’s advice, insisting to be a messenger of love between the western and eastern areas.

Fingers were pointed at the Lebanese Arab Army under Ahmed El-Khatib who was backed by Palestinian organizations. Having refused to pay the salaries of those LAA members who defected from the Lebanese Army, a decision to abduct Salem was taken in a bid to pressure him to reimburse the salaries. Yet, Salem showed no willingness to compromise, which is what reportedly lead to his termination. Although the accusation remains uncertain, there is no doubt that the Palestinian organizations and their allies shoulder the responsibility of the fate he encountered, given that they were in control of western Beirut at the time.

On the factual data surrounding the incident, MP Raymond Eddé, Head of the Lebanese National Bloc, reported in a press conference held on Tuesday, September 7, 1976 that he used to follow up on a daily basis with the factions and armed groups in the region to disclose information on the fate of Salem but to no avail. When the body was found, he embarked on a new pursuit to identify the murderers. Head of the PLO, Yasser Arafat visited him on August 18 with information that could help him disclose the criminal’s identity in 48 hours. At the end of the prescribed period, Eddé called Arafat and learned from him that “handing in the murderer would yield massive repercussions.”

“…From the very moment we heard about the abduction that targeted the martyr, we spared no efforts to rescue him, by all means possible. Yet, those heartless criminals serving as agents for the enemy’s intelligence finished him off before the hand of justice could smash them down”, Arafat said in the condolences’ telegram he dispatched to Salem’s family.

“Khalil Salem sacrificed his life to keep Lebanon unified,” said Bishop Ghafrail Salibi during the funeral Mass held at the Greek Orthodox Sayyidat Al Niyah Church in Hamra’s Makhoul Street on Tuesday, 3rd of August 1976. Afterwards, the procession headed from Western Beirut- as the area was called during the war- towards Al-Mathaf. Salem was switched to another car after entering Eastern Beirut area and the procession headed to Saint Nicolas Church in Ashrafieh where President of the Republic Elias Sarkis stated “I have lost you... I have lost a friend… Lebanon has lost you.” Khalil Salem was afterwards laid to rest in Btorram.

“When the administration was torn to shreds, and the legal government was non-existent, he was there executing the duty to the fullest…I shall always remember Khalil as a most faithful friend, a most conscientious, honest, hard working and devoted civil servant. His greatest bequest was the example he set as a responsible citizen and a high-ranking government employee”.

The life of Khalil Salem in the city and the high-ranking positions he assumed failed to erase his hometown, Btorram, from his memory. He used to spend his time practicing agriculture and his interest in the education sector motivated him to fulfill his childhood dream of establishing a new school providing free education to the youth in his town.