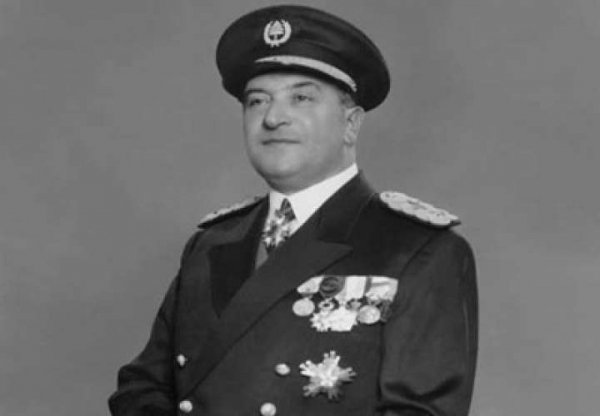 “The Chehabi plan to gain power was not put on paper by the way of specific orders or studies as such and the man behind the plan disclosed it to no one except Colonel Antoun Saad, Colonel Youssef Chmait and Captain Henry Chehab.

Some of us, junior military men, used to obey commands blindly and wait for our salaries at the end of every month, heedless of what was going on around us. A few others were interested in public affairs because war, according to Clausewitz, is a continuation of politics by other means.

The Chehabi scheme was clearer to me than to any other officer in the army, save for Colonels Saad and Chmait and Captain Chehab, because I was the kind of person who looked into the ‘whys’ and tried to understand why things were the way they were.

The scheme was only perceived by those who analyzed the conduct of Major General Fouad Chehab who, for all his secrecy and undisclosed intentions, used to make revealing utterances and statements.

Fouad Chehab had been aspiring to presidency for a long time and our dispute with him was never over this aspiration but rather over the means he used in trying to fulfill it. He wanted to come to power as a savior, by the unanimous vote of Parliament and without soliciting votes from anyone. So he pitted rivals against each other to the point at which some, weary with the conflict, begged him to accept the presidency.

We, a category of officers chaired by myself, were afraid that his plan might lead to a sectarian civil war and to bloodshed among innocent people and troops. We urged him to resort to open military intervention only when there were attempts to amend the Constitution for renewal purposes and to prohibit the opposition from stirring up rioting.

In our opinion, a military intervention or a military coup d’état is only necessary when communities are stricken by intractable diseases that cannot be cured by the traditional ruling class. A coup is, more often than not, reflective of the wrath of a helpless majority against a tyrannical ruling minority. It is a rapid military operation whose executors aim to seize power as fast as possible and it should be carried out in a matter of hours, if not minutes.

If we analyze what Fouad Chehab had done between 1952 and 1958, we realize that he had practically pulled off a slow-moving military coup plotted in five years and executed in one.

May 25, 1947 marked the date of the notorious parliamentary elections during which the opposition accused the army of partaking in an election fraud. Wishing to keep the accusations against him and the army at bay, Major General Fouad Chehab summoned Rushdi Maalouf, a renowned journalist who used to teach Arabic at the Military Academy, to his office and asked him to write and publish a series of articles justifying the position of the army so as to acquit it from the allegations of fraud. Maalouf declined the request, which infuriated Fouad Chehab and drove him to terminate the agreement following which Maalouf had landed his high-paying teaching position, and replaced him with the gendarmerie’s First Lieutenant Rizkallah.

This incident is proof of Fouad Chehab’s ruling ambitions and his tendency to separate the army from civilian authorities and to make it a state within the state connected to him directly rather than to the executive branch in the country.

In the spring of 1953, the former Governor of Beirut, Mr. Bashour Al-Haddad, met General Fouad Chehab and asked him why he refused to lead the delegation assigned to attend the coronation of Queen Elizabeth. “I believe I am going to finish him off before he finishes me,” he replied, for Fouad Chehab feared that President Camille Chamoun planned to isolate him from the army command while he was away at the coronation and this is why he refused to attend. It is said that the then US military attaché was bolstering the resolve of Fouad Chehab against President Camille Chamoun.

Equipping our small army with weaponry was our overriding concern. I have been receiving letters in this respect since 1955, i.e. since I arrived at the

Army Staff. That year, we signed an agreement with France in order to purchase light weaponry. Although we fulfilled part of the cost, France refrained from handing us the weapons agreed upon under the pretense that the Near East situation did not allow it and that there was an agreement among western countries to ban the delivery of weapons to the area.

Western countries did not loosen up their fists until after the events of the Suez Canal events and weapons started to flow in from three sources: England, the US and France. This generosity was the result of Lebanon’s position during the Suez Canal crisis and its decision not to cut off its diplomatic ties with the West.

Britain sent us a written letter offering 40 Charioteer tank destroyers, at LBP 15,000 each, although the real price is nowhere below LBP 500,000 per tank.

Fouad Chehab refused to pay and requested that the tanks be given to us for free. The exchange of telegrams between our ambassador to Britain, Ibraham Al-Ahdab, and the relevant British ministry spanned more than two weeks. Later, Fouad Chehab dispatched Colonel Fouad Lahhoud to Britain to negotiate the possibility of obtaining the tanks without charge. Lahhoud informed us that the British reduced the price to LBP 3000 per tank, a pretty negligible amount given the qualities and the condition of the tanks. We had also received twenty-two tanks from the British at zero cost a few months earlier but the Army Commander still insisted not to pay a penny for the new ones. I asked Colonel Chmait why there was resolve to obtain the tanks for free at a time when the price of all forty tanks would not exceed LBP 200,000 and he answered “because we do not want Colonel Fouad Lahhoud to receive the money.” And when I asked Colonel Chmait how could Colonel Fouad Lahhoud be the one getting paid when the British Ministry of Supply was the one requesting payment, he explained: “The Ministry of Supply will receive the payment and then pass it on to Colonel Fouad Lahhoud to strengthen his weight in Lebanon at our own expense.”

However, when Fouad Chehab wished to reinforce his own influence, he relied on France to equip the army with weaponry and bought arms in a deal worth LBP 5 million that was paid by installments over five years at LBP 1 million per year. These weapons included, among others, 20 AMX tanks, each at LBP 150,000. While Fouad Chehab was inspecting the new French equipment, I opined in front of him that the British Charioteer tank was better and had a bigger gun and a stronger engine. He fired angrily at me saying: “Why don’t you go and study its characteristics all over again. It seems that you have forgotten your profession. You are basically an armor officer.”

Of course, I knew about all the technical and military characteristics of each tank, and I knew them well, but I must have ignored the political characteristics, and that is what must have enraged our leader.”

Awad concludes his book saying “had the Chehabi terrorism been in the interest of change and development of Lebanon’s society and institutions, we would have forgiven Chehab his terrorism. But after 12 years of suppression of freedoms, we ended up with a government branded by the United States as primitive and unfit to rule.”