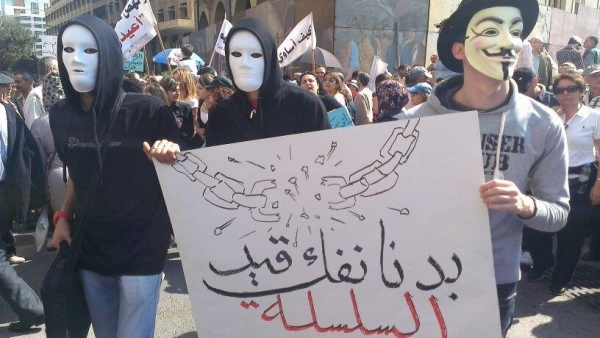 In Lebanon, there does not seem to be a logical relationship between causes and effects. For instance, those who are challenging the salary scale today did not object to the increase in school tuition fees or to the high cost of living. Besides, one cannot speak of public education subsidies as long as scholarships are being paid to public school teachers to enroll their children in private schools and universities.

Mr. Adra explained that emigration is the result of a certain social and economic system and emphasized that the staunchest opponents of taxation are unfortunately the people who already have money, for they view taxes as an absolute evil.

Mr. Amin Saleh, former President of the Lebanese Association of Certified Accountants and former head of the Office of the Accountant-General at the Ministry of Finance depicted the reality of public salaries, which, in his view, have been accorded little, if any government attention since the end of the Civil War (See pages 20 and 21). Saleh added that state spending between 1993 and 2010 stood at LBP 154,533 billion of which 32% or LBP 49,645 billion was assigned to salaries and pensions. In 2010, the salary scale accounted for 25.3% of budgetary spending down from 46% in 1993, which warrants the eligibility of the calls for the salary scale approval.

Saleh believed that the salary scale can be approved without the need for additional taxes, suggesting strict collection of the state’s funds and neglected rights, particularly those derived from public coastal properties and from the Casino, the Lottery the airport and the maritime port. He also called for reforms in the tax system noting that withholding taxes accounted for 10% of Lebanon’s GDP compared to 43% in France.

Noteworthy was the oral intervention of Mr. Adnan Bourji, head of the Basic Education Association and member of the Union Coordination Committee who stated that the activism on May 14, 2014 has paved the way for a large-scale popular movement that transcended sectarian and regional boundaries and unveiled the profound financial needs of employees and the country’s need for reforms at all levels.

Bourji highlighted that salaries evolved at a normal pace from 1960 to 1983, pointing out that the chaos began in 1983. Later from 1997 until the present day, salaries have been frozen. He talked about the approval of Law no. 709 in 1998, which calculated pensions on the basis of 85% rather than 100% of the salary thus violating the contract terms pursuant to which employees entered into state jobs. For example, retirement deductions paid by employees on the basis of an LBP 500,000 salary, entitle them to receive an amount of LBP 398 million after 40 years in service, but this is not being applied and it constitutes a violation of the rights of retirees. Furthermore, the family allowance has been fixated since 1997 on the basis of LBP 300,000 (including LBP 60,000 per wife and LBP 33,000 per child) while we should pay all minimum wage taxes on the basis of LBP 675,000.

“Regarding the State Employees Cooperative, everybody knows that we cannot be admitted to any hospital as was previously the case, let alone that we have to wait 6 months to receive only 50% of our medication’s bill. If our doctor’s bill amounted to LBP 150,000, we would be entitled to no more than LBP 25,000” added Bourji

These factors, among others, have lead to the explosion, not to mention the inflation that erupted in 1996 and has been on the rise since. By the end of 2011, inflation rates amounted to 121%, leading judges and university professors to claim and receive a 121% wage hike. This has widened the gap between the salaries of secondary teachers and those of university professors, noting that the discrepancy did not exceed 3 to 4 years previously. Today, the difference has grown to 52 grades, which is tantamount to 104 years in service.

Bourji attributed the problem to the philosophy that has been adopted since 1993 wondering whether anything will be left from Lebanon’s welfare and fearing that the future trends will be focused on harnessing the state institutions for the benefit of the vicious capital, which has pushed public debt up to USD 65 billion and the ensuing interest to LBP 6.5 billion annually. The governments that succeeded to power have all denied and overlooked the provision dictating an annual wage increase in Law no. 717.

Actuary Ibrahim Mhanna who championed the cause of employees viewed that the problem resides in surplus labor especially among teachers and in the military.

In his speech, former Minister of Labor Charbel Nahhas lashed out at the political class and the former Prime Minister accusing them of manipulating the rights of employees.

Head of the Consultative Council for Studies and Documentation, Abdul Halim Fadlallah, underlined the role of the Union Coordination Committee in advocating the rights of employees, while 18 propositions were submitted by Dr. Mohammad Saleh for the funding of the salary scale after the elimination or reduction of a number of indemnities and prerogatives.

The success of the discussion was also fueled by insightful input from Dr. Mohammad Moghrabi and lawyer Bouchra Khalil.