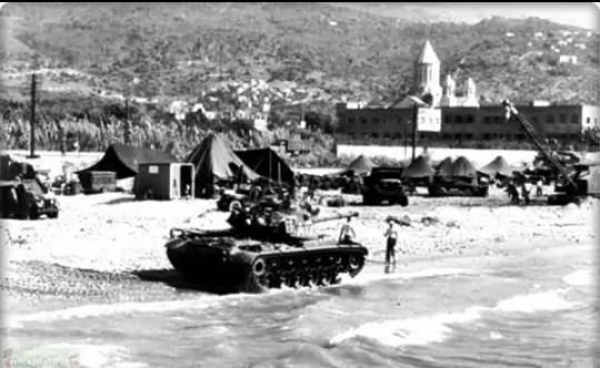 On May 8, 1958, the anti-Chamoun editor of Al-Telgraph, Nassib Matni, was assassinated. The assassination, which Chamoun was held accountable for, triggered the first spark of an all-out war that started in Tripoli and expanded to Beirut and a number of regions across Lebanon. Opposing armed forces assumed front line positions and barricades and trenches were set, transforming Lebanon into a regional and international battlefield and signaling the eruption of a full-scale sectarian war.

Amid rising tensions in Lebanon and the region, a coup d’état was being planned in Iraq. On the Monday morning of July 14, 1958, General Abdul Karim Qassem overthrew the pro-British Iraqi monarchy and seized military control of Baghdad after killing Crown Prince Abdul Ilah and Prime Minister Nouri As-Said. In response, Britain and the United States deployed their troops in the region to maintain the support of their Arab allies amid the threats of the Soviet-backed Abdul Nasser.

Reflecting upon the news leaks, President Chamoun feared that the success of the coup d’état plotted in Iraq under the support of Abdul Nasser and Syria might encourage Abdul Nasser to send his troops to Lebanon. As his concern was corroborated with further evidence, Chamoun decided to seek the assistance of the US marines and signs of an American intervention started to surface after the US Ambassador to Beirut Robert Mcclintock demanded the then Army Commander, Fouad Chehab, to put an end to the armed opposition against President Chamoun and curb the smuggling of weapons from Syria, before the US took the matters into its own hands.

On July 14, 1958, President Chamoun summoned the ambassadors of France, Britain and the US respectively and requested them to keep their word and carry out the military intervention they had promised. At 2:00 pm, Chamoun learned that his request was met with approval and that the US Sixth Fleet was on its way to Lebanon.

On Tuesday, July 15, nine military vessels associated with the US Sixth Fleet anchored near the Lebanese coast, bringing out 16 boats and a number of armored vehicles and amphibious tanks carrying 5000 Marines. The landing was aimed at obstructing the expansion of the Communist and Nasserite movements to neighboring Arab countries following the success of the coup in Iraq. At the time, Abdul Nasser had control over both Egypt and Syria under the United Arab Republic and the victory showcased in Iraq reflected the efficiency of the cooperation between Abdul Nasser and the Soviets.

Washington held the right to protect its interests in the Middle East and to defend the Arab allies of the West, including Lebanon and Jordan, from the risks threatening their regimes as a justification for its intervention.

During the next 24 hours, 3600 Marine snipers had arrived to Lebanon and headed to the airport to keep it safe. The US military presence picked up pace when airplanes carrying troops and armored vehicles and equipment landed in Lebanon, raising the total number of troops to around 7000 in Beirut and its suburbs.

75 warships belonging to the Sixth Fleet docked in the Port of Beirut on July 18 and 10600 US troops were deployed on Lebanese land by July 25. Thousands of leaflets in Arabic were dropped from American aircrafts on July 22. They all carried images of the US President Dwight Eisenhower and a message clarifying the objects and aims of the US military intervention performed upon the request of the Lebanese government. Preserving Lebanon’s independence and forbidding the meddling in its affairs and the jeopardy of its security formed part of the leaflets, which also vowed immediate retreat l from Lebanon as soon as stability and security were restored.

On the other hand, the US military command was keen on informing the Lebanese Army Commander that the US troops were not present in Lebanon to smash the opposition, but to assist Lebanon’s government in restoring order to the streets and reach a peace agreement that could prevent a civil war. The US troops remained in Lebanon until the election of Fouad Chehab as President of the Republic and the deflation of the crisis.