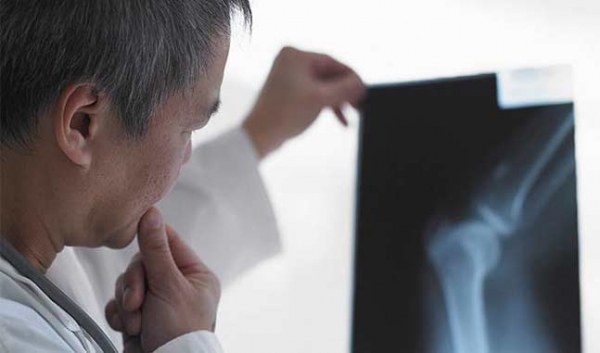 The disease is three times more frequent in women than men and although it occurs most commonly in middle age, it can begin at any age including childhood, and affects about 0.6% of the US Population (about 2 million).

The first modern description of the disease was in 1800 by the French surgeon, Augustin Jacob Landré-Beauvais, who, contrary to other physicians of his time, thought that the disease was a form of gout. The English ‘Physician Extraordinary’ to Queen Victoria, Sir Alfred Bering Garrod, first coined the name, Rheumatoid Arthritis, in 1859.

RA symmetrically attacks the small joints of the hands, feet and neck, but larger joints, such as knees and shoulders, are also often affected. The inflamed joints become red, hot, swollen, stiff and tender, interfering with movement and activities. Unlike osteoarthritis, morning stiffness is prolonged, typically lasting more than one hour. Untreated, the joints are progressively destroyed, leading to deformity and disability.

Predisposition to the disease is genetically programmed, with a high prevalence in first-degree relatives. However, interactions between genes and environment are common: 1. RA is three times more common in heavy smokers, especially men. 2. Moderate alcohol consumption appears to be protective. 3. Certain herpes viruses such as the Mononucleosis virus and Herpes 6 virus are associated with the disease. 4. Vitamin D deficiency is common among RA sufferers. 5. Some studies suggest that Vitamin D supplementation may have a protective role.

The immune mechanisms of RA are very complex and remarkably specific: 1. Certain cytokines (small, cell-signaling molecules called TNF) seem to drive the disease onward. 2. Blocking these TNF molecules holds back the disease. 3. Inactivating the bone marrow’s B-lymphocytes (but not T-lymphocytes) also holds the disease back. 4. The deranged immunity causes patients to make antibodies against their own antibodies (RF), and against their own proteins (ACPA). 5. These antibodies, which reflect disease activity, can be quantitated in the blood.

The final result of these deranged immune processes is the progressive destruction of joints and other organs, leading to disability and ultimately to patient’s demise. Thus, early diagnosis and prompt, aggressive treatment are essential for preserving function by preventing the irreversible joint and organ damage. The goal of early treatment is the induction and maintenance of remission, which entails the disease becoming dormant and thus keeping it inactive.

Traditionally, the standard treatment of RA is an anti-immune medicine called Methotrexate, which induces remission in only 30% of patients. When Methotrexate fails, the modern approach is to add other anti-immune medicines, called biologicals, which block the TNF and B-lymphocytes that drive the inflammation and joint destruction onward. The problem with biologicals, besides serious side effects, is their expense. A treatment course of one year usually costs many thousands of dollars and is unaffordable, especially to those who are uninsured.

A treatment-altering study by O’Dell et al., published in the July 25, 2013 issue of The New England Journal Of Medicine, has challenged this modern strategy of first adding biologicals when Methotrexate alone fails to induce remission. These researchers compared the modern treatment of Methotrexate-resistant RA with the old treatment that was in use before biologicals were introduced. They showed that the old treatment, which added two cheap medications, Sulfaslalzine & Hydroxychloroquine, to Methotrexate was slower but not inferior to the modern treatment.

The advantages of the old treatment are its affordability and relative safety. In an environment of rising medical costs, it is incumbent upon physicians to practice cost containment, especially when spending less is not medically inferior to spending more.

In the US today, 20% of adults, even many who are fully insured, have trouble paying their medical bills, and 1.7 million are affected by bankruptcy caused by unpaid medical debts. Given this medical-cost crisis, it is no longer reasonable to resort to the modern, expensive biologicals when the older, cheaper traditionals are not inferior in their ability to induce remission.